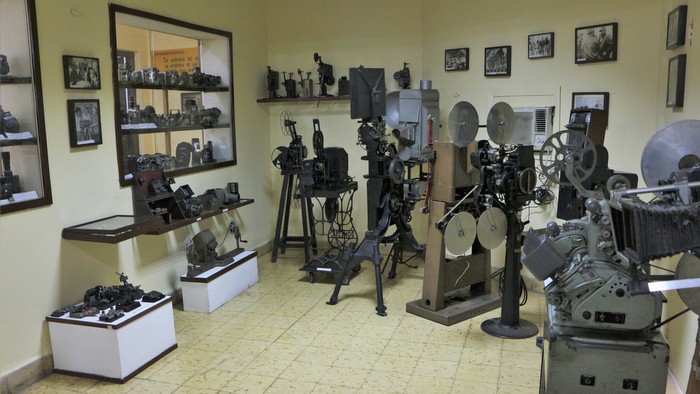 Because saving heritage today means escaping from extinction. Much more when it comes to projects as comprehensive as the Image Museum Bernabé Muñiz Guibernau, which is a collection that addresses the history and evolution of photography, cinema, radio and television from 1840 to the present day.

Havana-born Barnabas Muñiz Guibernau (Bebo) was born on June 18, 1925 and was a professional cameraman since 1943. When the Cuban Revolution triumphed and found himself in the east of Santiago de Cuba, Bebo was one of the artists who joined the Caravan of Freedom accompanying as photoreporter the Revolution Leader, Fidel Castro from the Heroic City to the capital. After that historic caravan, Bebo returned with his family to Santiago, living there definitely. During his life he held different positions at the Cuban Institute of Cinematographic Art and Industry and national television.

Now, since his arrival in Santiago de Cuba Bebo began the collection of different equipments linked to the film medium - some bought by him - others donated by institutions, friends and colleagues ... All that allowed that in September 8, 1975 he inaugurated The image museum in his own house. It was not until 1990 when the Museum moved to its current location. Under the direction of Bebo, a new assembly of 4 permanent exhibition halls is organized, opening the doors to the public on March 21, 1992. After the death of the very-loved Bebo Muñiz in 2000 and the important legacy of the artist, The National Heritage Council establishes the Bernabé Muñiz Guibernau Image Museum institution.

Who visits the Image Museum will find in the Fernando Lezcano Photography Room, valuable cameras that take their value in antiquity, the state of conservation and the property of different personalities. Different attachments, flashes of several types and brands highlighting those of magnesium from the year 1880, of fan from 1940, rotary from 1960, special lenses in which the fish eye lens is found. Complete the sample photometers of several brands dating from the 30s and 40s to the present day.

If you are looking for historical elements of cinema in Cuba, you will see a special room dedicated to the seventh art, several cameras being, the Pathe Cinema of 35 mm fabricated in France in 1898 and chosen among the first cameras that arrived to the Island, the oldest. A collection of silent and sound film projectors is also exhibited, the oldest being the Pathe Ferres projector Royer 35 mm made in France in 1896, also includes a Pathe Baby 9mm electric projector made in France in 1914, an RCA projector made in the EU in 1950 and a Ukrania Kuhan projector manufactured in the former USSR in the year 1959.

For television lovers there is a room to explore the history of television in Cuba shown through several cameras and other broadcasting equipment. You can also enjoy a 1940-year Chevrolet brand mobile studio manufactured in the USA, one of the first three remote control units that entered Cuba in the year 1950.

And the record of the spoken word and the sounds could not be missing. In the room dedicated to the radio there is a collection of old microphones, the most meritorious being a coal microphone manufactured in the US in 1920 followed by other coal manufactured in 1928, RCA, Electro Voice and Wester Electric microphones manufactured in the year 1950, dynamic Austrian AKG microphones of 1964 and occupies a special place in an RCA Víctor R-44 microphone used in the inauguration of the CMKC Oriental Radio station in Santiago de Cuba.

Other indispensable equipment on the radio like telegraphy and telephony, a gramophone RCA - Victor made in 1904, one of the phonographs of Thomas Alva Edison, a General Electric wire tape recorder made in 1940 and a brand-name acetate disc recorder manufactured in the US in 1950, producing unique pieces. The radio collection also includes a Presto audio mixer amplifier manufactured in the USA in the 1950s.

Previous publication Baselitz, Richter, Polke, Kiefer: The Early Years of the Old Masters Next publication To the death of the poet