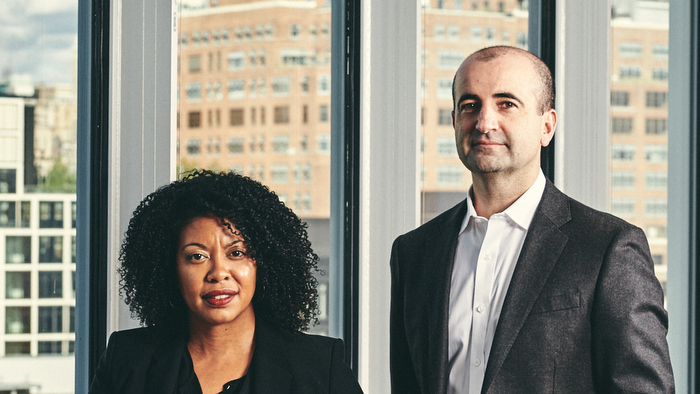 The Whitney Announces Curators of the 2021 Biennial

The Whitney Museum of American Art announced today that its 2021 Biennial will be co-organized by two members of the Museum's curatorial department, David Breslin and Adrienne Edwards. This will be the Biennial's 80th edition. The exhibition will open in spring 2021. The 2021 Whitney Biennial is presented by Tiffany & Co., which has been the lead sponsor of the Biennial since the Museum's move downtown.

Alice Pratt Brown Director Adam D. Weinberg noted: "The central aim of the Biennial is to be a barometer of contemporary American art. Each Biennial is a reflection of the cultural and social moment as it intersects with the passions, perspectives, and tastes of the curators. David and Adrienne will be a great team. They are inquisitive, curious, and are acutely attuned to the art of the current moment. No doubt they will bring fresh outlooks to this historic exhibition and reinvent it for these complex and challenging times."

Scott Rothkopf, the Whitney's Senior Deputy Director and Nancy and Steve Crown Family Chief Curator, said, "David and Adrienne truly represent the best spirit and ideals of the Whitney. Not only are they devoted to—and beloved by—living artists, but they bring to the art of our time a deep historical and scholarly awareness. The most recent editions of the Biennial have reaffirmed its vitality and relevance, and I look forward to discovering how another pair of Whitney curators will lend their voices to our signature exhibition."

The biennials were originally organized by medium, with painting alternating with sculpture and works on paper. Starting in 1937, the Museum shifted to yearly exhibitions called Annuals. The current format—a survey show of work in all media occurring every two years—has been in place since 1973. The 2019 Biennial (still on partial view on the Museum's sixth floor until October 27) was organized by two Whitney curators, Jane Panetta and Rujeko Hockley. It featured seventy-five artists and collectives working in painting, sculpture, installation, film and video, photography, performance, and sound.

David Breslin was recently named the DeMartini Family Curator and Director of Curatorial Initiatives, a role he will assume this month. Since joining the Museum in 2016 as DeMartini Family Curator and Director of the Collection, Breslin has spearheaded the Museum's collection-related activities, curating a series of major collection exhibitions and overseeing acquisitions. Working closely with his curatorial colleagues, he has organized or co-organized four timely and thematized collection displays, including Where We Are: Selections from the Whitney's Collection, 1900–1960, An Incomplete History of Protest: Selections from the Whitney's Collection, 1940–2017, Spilling Over: Painting Color in the 1960s, and The Whitney's Collection: Selections from 1900 to 1965, which is currently on view on the Museum's seventh floor. In 2018, he co-curated (with David Kiehl) the landmark retrospective David Wojnarowicz: History Keeps Me Awake at Night.

Breslin came to the Whitney from the Menil Drawing Institute, where he created an ambitious program of exhibitions and public and scholarly events and helped to shape the design of the Institute's new facility. He also oversaw work on the catalogue raisonné of the drawings of Jasper Johns and grew the collection. Prior to the Menil, Breslin served as the associate director of the research and academic program and associate curator of contemporary projects at the Clark Art Institute in Williamstown, MA; he also oversaw the Clark's residential fellowship program and taught in the Williams College Graduate Program in the History of Art. Breslin co-edited Art History and Emergency: Crises in the Visual Arts and Humanities (Yale University Press, 2016), a volume that grew from a Clark Conference he organized with art historian Darby English.

At the Whitney, Edwards curated Jason Moran, the artist's first museum show, now on view on the Museum's eighth floor. She originated the exhibition at the Walker in 2018; it previously traveled to the ICA Boston and the Wexner Center for the Arts. The exhibition features a series of performances, Jazz on a High Floor in the Afternoon, curated by Edwards and Moran. She organized the event commencing the construction of David Hammons's Day's End, featuring a commission by composer Henry Threadgill and a "water" tango on the Hudson River by the Fire Department of the City of New York's Marine Company 9. Earlier this year, Edwards organized Moved by the Motion: Sudden Rise, a series of performances based on a text co-written by Wu Tsang, boychild, and Fred Moten, which presented a collage of words, film, movements, and sounds.

For Performa, Edwards realized new boundary-defying commissions, as well as pathfinding conferences and film programs with a wide range of over forty international artists. While at the Walker, she co-led the institution-wide Mellon Foundation Interdisciplinary Initiative, an effort to expand ways of commissioning, studying, collecting, documenting, and conserving cross-disciplinary works. Edwards's curatorial projects have included the critically acclaimed exhibition and catalogue Blackness in Abstraction, hosted by Pace Gallery in 2016. She also organized Frieze's Artist Award and Live program in New York in 2018. Edwards taught art history and visual studies at New York University and The New School, and she is a contributor to the National Gallery of Art's Center for the Advanced Study in Visual Art's forthcoming publication Black Modernisms.

Previous publication Oscar Murillo "We should recognise that we ought to have a system of reconciliation and solidarity to heal as a society" Next publication Gary Nader presents Ricardo Cisneros: Namibia, Tierra Sublime