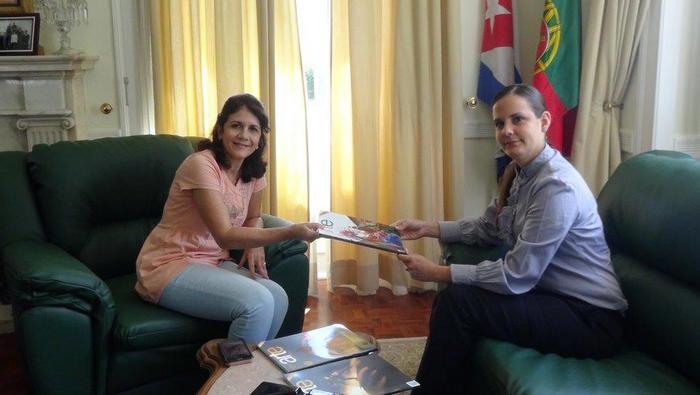 Portugal and Cuba: more than 100 years of respect, friendship, and joy

The Embassy of Cuba in Portugal, during this year, has carried out a series of joint activities with Portuguese institutions and the Cuban cultural association, constituted by Cubans residing in Portugal to commemorate 100 years of bilateral relations between the two countries.

Exclusively for the magazine Arte por Excelencias, Anabel Serrallonga Hidalgo, Head of Cultural Affairs of the Embassy of Cuba in Portugal comments: “The 100 years of bilateral relations between Cuba and Portugal, refer to a century of diplomatic relations, that is, opening of embassies because in practice it is confirmed that relations existed before; in fact, we have documents that argue that more than 500 years ago there was already cooperation in the maritime area and in different economic sectors”.

“On the occasion of the centenary and the day of the Cuban Culture - affirms - we will open on October 17, an exhibition of the renowned Cuban photographer Paco Bou at the headquarters of the Camões Institute in Lisbon that will include a selection of works on the National Ballet of Cuba , jazz, cinema and other artistic manifestations.

During the month of November, on the 14th, this artist will present another exhibition in the same place, dedicated to the 500 years of Havana, whose curatorship is in charge of the plastic artists Raonel Puentes and Niurka Bou.

These actions close a cycle of activities that we have carried out during 2019 that included a concert convened in February by the Cuban Association at the São Jorge Cinema with Cuban and Portuguese musicians where Vitorino, Luis Represas, José de Bray, Raúl Reyes and Osvaldo Pegudo will participate”.

In April, the show Qué linda es Cuba was presented at the Estoril Casino in Lisbon, organized by the Suly Dance academy, where hundreds of Cuban and Portuguese children sang and danced hip-hop, salsa, ballet, contemporary music ...

“We present the exhibition Cuba and Portugal: 500 years of knowledge, which includes documents from the National Archive of Torre do Tombo that show the antiquity of the relations between both countries. Some of them very interesting as they include official visits made to Portugal after the Carnation Revolution, a map of Havana made by Portuguese, news of how the writings on the Cuban Revolution were censored by the political police when they were released during the dictatorship Salazarist, among others.

Another project coordinated by the Portuguese embassy in Havana, was the presentation of a documentary series about the writer Eça de Queiroz, one of the greatest icons of Portuguese literature that was precisely consul in Havana and that is being broadcast by the RTP.

This audiovisual reflects the detailed and investigative work he carried out during his diplomatic mission in Cuba on the living conditions of the Macau Chinese on the Island, who were introduced almost as slaves. The official presentation of the film was attended by the president of the Camões Institute, Luis Faro Ramos, and the Secretary of State of the Portuguese Communities, Luis Carneiro.

Finally, I would like to highlight that Portugal is a country where Cuba is known, its culture, its music and there is a very special relationship, of respect, friendship, and joy”. - Anabel concludes.

On the cover: Diana Rosa Riesco, representative of Arte por Excelencias, with Anabel Serrallonga Hidalgo, in charge of the cultural affairs of the Embassy of Cuba in Portugal.