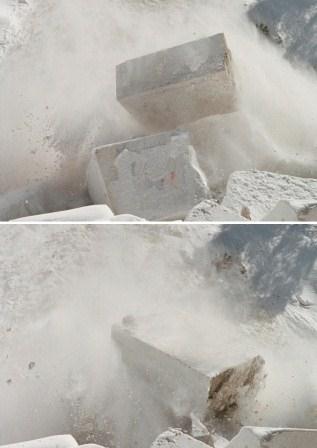 Edouard Malingue Gallery is thrilled to announce the presentation of a new solo project by Jeremy Everett as part of the curatorial exhibition GRANPALAZZO in Zagarolo, Italy in the outskirts of Rome. Situated in the 16th century Palazzo Rospigliosi’s resplendent Sala dei Motti, the tripartite oeuvre responds to the site’s rich history and evocative lyricism.

Jeremy Everett (b. 1979, USA) creates poetic works that subtly evolve beyond process and creation and investigate the intrinsic relationship an object has to space. His interventions translate into visually impacting formulations of sensual and subtle violence: quiet, delicate, measured yet powerful. 'Untitled (il maestro)’ (2016) conceived for GRANPALAZZO 2016 relates to Palazzo Rospigliosi’s aura and history. A slab of Italian marble, a fragment of monumental architecture, seems to have fallen on the keyboard of an electric organ, whose notes produce a continuous vibrating sound that haunts the space. A pair of red loafers ‘Untitled (42)’ (2016) made by designer Adriano Stefanelli after the model conceived for Pope Benedict XVI, rests on the floor as if forgotten, while ‘Untitled (pilastro)’ (2016) acts as a surreal prop inspired by Fellini’s Roma’s Vatican Fashion Show. Everett’s ability in creating a poetical narrative is evident. His work is hypnotic, transcendental and disturbing whilst simultaneously pervading a mesmerising quality. Subtle yet direct, it does not spell out what should be seen but rather opens one’s mind to numerous transformative possibilities. Each work exists as the fragment of a sentence, a lyrical exposé, released into the world with precise abandon; the visual confrontation of a new world that exists within yet beyond our own.