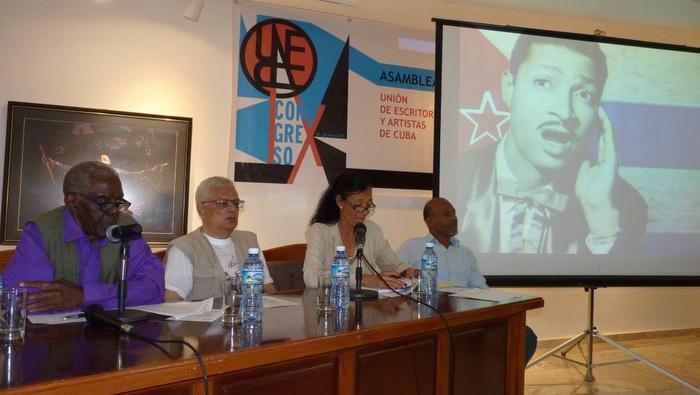 The centenary of Bartolomé Maximiliano Moré Gutiérrez (1919-2019), better known as Benny Moré, will be leitmotiv for a wide journey of cultural activities that will be developed throughout 2019; said program was announced by Odalys Bertot, Director of the Music and Entertainment Marketing Company "Benny More", at a press conference held in the Villena room of the National Union of Writers and Artists of Cuba.

During the 15th and 16th of February at eight o'clock in the evening, Galeano a lo grande will take place, a tribute to who was also known as the Bárbaro del Ritmo (great of rhythm). Among the actions to be developed are the Benny Moré Interpretation Contest, which will take place at the Casa de la Trova in San Miguel del Padrón, the Danzón Habana International Festival, dedicated especially to Benny, and which will feature performances by Beatriz Márquez, Yaíma Sáez, Mundito González, Eliades Ochoa and the Ballet of Cuban Television.

As usual, the pilgrimage to his grave, located in Santa Isabel de Las Lajas, Cienfuegos, will take place on February 19, when family, friends, musicians and fans of the musician in general gather. The tribute will include a large part of the artistic manifestations, including the plastic arts, with the inauguration of the exhibition "Benny Forever", on February 22 at five in the afternoon at the Cultural Center of 31 and 2, Plaza de la Revolución.

The range of celebrations will continue to unfold throughout the year and the documentary Los últimos días del Benny is awaited with great anticipation and is expected to be ready by August 24; day in which one of the greatest singers of Cuba of all time was born.

The conference was attended by many of the composers and friends of Sonero Mayor and Juan Arrondo, Lino Frias, Ernesto Duarte, El Conde Negro and Francisco García Caturla. also to the outstanding journalists and scholars of his life and work Omar Vázquez and Nancy Robinson were deservedly recognized.

During his speech the renowned musicologist José Reyes pointed out that 54 percent of Benny's discography obeys to boleros, and even so, this facet of the musician is not much remembered. He always stands out as a rumbero -he commented-, although he played cumbias, Mexican music, sang with the Big Band and was passionate about Jazz. In addition, he said, that Benny was the first to sing at the Oscars. "He's a Cuban singer. His voice is there, in the recordings and there are his videos, " he concluded.

Publicación siguiente The sculpture that pays homage to Alicia Alonso