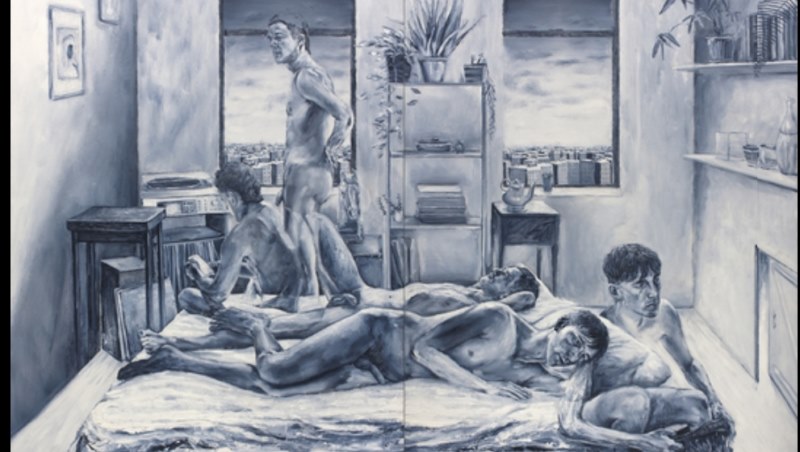 GR Gallery is pleased to announce  'Cerberus', the first exhibition of Adam Lupton with the gallery and in New York.  A total of 18 oil and acrylic paintings will be shown; this body of Lupton's work grows out of his OCD, where performing mental and physical rituals, endlessly seeking assurance, and repeating mantras and projections make up his every day – mediating between himself and an unyielding "otherness". Through this lens, the work weaves together individual and societal rituals, spiritual schizophrenia, and self-defining myth, thereby illuminating our various attempts at and desires for certainty. These overlaps spill into narratives that play out on the canvas – borrowing their basis from Greek myths, religious rituals, rock lyrics, modern dating plights, domestic routines, history, introspection, sexuality, and compulsions – evocatively casting the contemporary world of individual and societal anxiety and isolation.

"Cerberus" is curated to the viewers to embark on a newfound journey, not only mentally but also parallel to a multitude of visions. Lupton's paintings appear like a momentary hallucination, a deep lapse – paradoxically – into one's own head. The familiarity of the world is punctured by distorting perspectives, abstracted figures, and a familiar-but-unknown element that feels both real and uncertain – an emotional déjà vu of sorts. In some instances this feels overly full, and in others painfully vacant – like the symphony that compulsive ruminations often play on the senses. The abstracting, cacophonic iterations of an individual embody the intertwining dialogues one has with the multitudes of one's self. This cyclical monologue-cum-dialogue both agitates and submerges tension, while dampening time and space of the outside world.

Adam Lupton (1987, Vancouver, Canada) currently lives and works in Brooklyn. Adam Lupton's work teeters between the emotional and the pictorial. By mining personal and collective assumptions and hollowing out culturally potent symbols and mythologies, he explores individual and societal anxiety and isolation. In approaching a range of layered themes and narratives, Lupton aims to eliminate prescriptive visual outcomes. Subjects are often given antithetical functions and signifiers are emptied of conventional signification, destabilizing the affect of form and content. With Plato's allegory of the cave in mind, Lupton attempts to reconsider and restructure the way viewers negotiate their reality and ideology by troubling both visual representation and emotional interpretation. For some, Lupton's work divulges more than is expected, for others not enough. One experience may be unpleasantly full, while the other is painfully vacant.