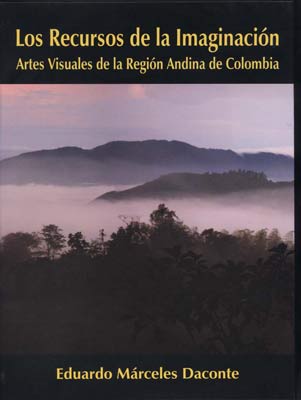 In his most recent book, Eduardo Marceles Daconte examines, from different perspectives, the development of visual arts in the region, particularly during the second half of the 20th century and the first decade of the 21st century, he assesses the work of outstanding artists and the development of genres and trends. The book prefaced by historian Alvaro Medina is widely and beautifully illustrated with pictures of mentioned works.

The first article: “Colombia: Images of all times” speaks about the stages of the history of art in Colombia: San Agustin’s statues are referred to as symbols of pre-Hispanic times, together with the funerary architecture of Tierradentro, the pottery and silver articles of the indigenous civilizations of Calima, Quimbaya, Tolima, Zenu, Tumaco, Nariño, Tayrona and Muisca. The colonial epoch gradually generates a catholic religion imaginary that accumulates crossbreeding features and takes shape in carvings and paintings; this period ends with scientific expeditions that used drafts and watercolors through which the territory’s natural resources were made known. In the mid of the 18th century, there is a boom of the miniature and portrait; the latter as a means of distinction of the notable. After the independence wars, in the first few decades of the 19th century, pictorial representations give an account of the battles while the viceroys in portraits are replaced by war heroes. By the end of the 19th century, visual arts as well as theater and literature are characterized by costumbrismo; in addition to landscape painting, woodcut and political caricature also excelled.

According to the author, until well into the 20th century, the arts were mostly academically oriented. However, in the 1930s, the Group Bachué used post-impressionism and cubism resources to illustrate aboriginal myths and legends, and artistic expressions of political and anthropological content were deeply influenced by Mexican mural painting. The first signs of a formal renovation that burst in the 1950s appeared during the forties. After the 1960s, the development of visual arts is characterized by the plurality of trends: from abstract expressionism, pop, povera art and minimalism to conceptual art, hyperrealism and personal action (performance), all of them featuring key players. At the beginning of the 21st century, there is a large number of artists who contribute to the iconographic renovation of plastic arts that is already exhibiting post-modernity signs.

The essay titled: “From Bogota towards the periphery: Trends and protagonists of visual arts in the Andean region,” offers a more thorough view of this evolution. The article is central to the book and, in our opinion, is fundamental to understanding the artistic process in Colombia. It acknowledges the 1930s generation made up of sculptor Romulo Rozo and painters Luis Alberto Acuña, Ignacio Gomez Jaramillo, Pedro Nel Gomez, Alipio Jaramillo, Carlos Correa and Gonzalo Ariza, who highlighted both pre-Columbian and national elements. Nevertheless, stylistic unity is not a feature in the decades to follow. The following generation known as The New Ones (Los Nuevos), which was both cosmopolitan and sophisticated, accepted European and American trends. Already in the 1950s, painters Alejandro Obregon, Enrique Grau, Fernando Botero, Cecilia Porras, Guillermo Wiedemann, Juan Antonio Roda, Debora Arango, Jorge Elias Triana, Armando Villegas and Lucy Tejada, as well as sculptors Edgar Negret, Eduardo Ramirez Villamizar and Hernando Tejada were part of the generation that introduced Colombia to modern art.

As of the mid fifties and throughout the 1960s, visual arts were marked by the conflict between abstraction and figuration. Marco Ospina is considered as a pioneer of abstract art in the 1940s. Some representatives of abstraction were Edgar Negret, Eduardo Ramirez Villamizar, Judith Marquez, Jorge Elias Triana and Guillermo Wiedemann and then, once the trend prevailed, it was represented in different ways by the work of painters Armando Villegas, Augusto Rivera, Alvaro Herran, Leonel Estrada, Carlos Rojas, Luciano Jaramillo, Manuel Hernandez, Maria Thereza Negreiros and Nirma Zarate. In the seventies there were two well-defined trends: geometric art and freer expressionism. Falling in the geometric art ruled by rationality, order and precision are works by forerunner Omar Rayo, Eduardo Ramirez Villamizar and Carlos Rojas. Other noteworthy examples of geometric art can be found in the work of Fanny Sanin, Manolo Vellojin, Alvaro Marin, Sara Modiano, Manuel Hernandez, Rosa Sanin, Diva Teresa Ramirez and Hugo Zapata, whose paintings are assessed by the author.

Noting that “figuration has been a constant feature throughout the history of Colombian art, except for the short period of 15 years between 1955 and 1970, when artists experimented in a nearly hegemonic way with abstraction.” Eduardo Marceles makes an analysis of the development of figuration. The author starts by recognizing landscape painters of the first decades of the 20th century, such as Andres Santamaria, Ricardo Borrero, Roberto Paramo, and Francisco Cano; he points out the resurgence of the genre in the seventies in works by Gonzalo Ariza, Antonio Barrera, German Ferrer-Barrera, Ana Mercedes Hoyos, Ennio Ruddy Moreno and Luis Ernesto Ortiz, among others. The author highlights how the human figure has especially treated within a context of reference to social problems. This trend included since the seventies productions by a great number of renowned artists, among them Carlos Granada, Beatriz Gonzalez, Umberto Giangrandi, Luis Caballero and Clemencia Lucena. A highlight of this epoch is the flourishing of artwork, with Umberto Giangrandi, Augusto Rendon, Hanne Gallo, Alfonso Quijano, Fabio Rodriguez, Carlos Granada, Nirma Zarate, Pedro Alcantara Herran and Diego Arango as its main exponents.

Eduardo Marceles Daconte follows on with the study of subsequent generations: The Novisimos, which took this name in 1977, emphasizes the implementation of new concepts, new techniques and the use of different materials in both painting and sculpture. He studies the work of Maria Cristina Cortes, Margarita Gutierrez, Elsa Zambrano, Maria Elena Bernal, Jaime Finkelstein and Dennis Echeverria. According to the author, the most prolific artist in the use of varied materials is sculptor and painter Nadin Ospina. In that regards, he also analyses works by Teresa Sanchez, Gabriel Silva, Jaime Toro, Camilo Velasquez, Luis Fernando Zapata and Luis Eduardo Urueta.

Following the development of history, the research about art in the Andean region is completed with the article titled: “Insurgent generations of the 21st centuries.” Here, starting from the confirmation of a globalized trend, in which concepts and techniques that have been already explored are updated in a context soaked up by post-modernity, the author analyzes the work of current outstanding artists in different genres. He labels Doris Salcedo and Maria Fernanda’s installations and sculptures as preeminent. Likewise, in the fields of painting, photography, video, installation and performance, he assesses productions by Jorge Julian Aristizabal, Rodrigo Facundo, Claudia Munera Beltran Obregon, Elias Heim, Juan Fernando Herran, Carlos Salas Silva, Luis Fernando Roldan, Ricardo Valbuena, Margarita Gutierrez, Nancy Friedemann, Claudia Ortiz Prieto, and Dilsa Jimenez, among many others.

Another article providing a historical view and forming part of this global and analytic presentation of visual arts in the Andean-Colombian region is: “Presence of women in the Andean painting.” The author notes that in the colonial times women who made incursions into art did it only as a hobby and it wasn’t until the late 19th century, in the 1886 and 1899 Salons, when the participation of women was brought to notice. In 1910 on the occasion of the Centenary Exposition (Exposición del Centenario) two professional painters became known: Elena Largacha and Margarita Holguín Caro. In the 1930s the work of sculptor and painter Hena Rodriguez Parra excelled the Group Bachué; likewise, the artistic work of Berta Clausen de Rueda and Judith Marquez in the subsequent decades is praiseworthy. As of the forties and fifties, women were part of the field of art. In that context, the first woman to propose a protest painting in the country was Debora Arango.

To the previously described chapters add others that also contribute to the presentation of Eduardo Marceles Daconte’s deep research; some of them are: “Plastic arts in Eastern Colombia,” “Photography profiles,” “Expressionism: History nomad,” “Sculpture in the Andean region,” and “Still life art.” As we have noticed before, the book contains several articles detailing the work of outstanding artists; it also includes: “A historic review of art critic in Colombia” and closes with: “Interview to Marta Traba: A critical view of plastic arts in Colombia.”