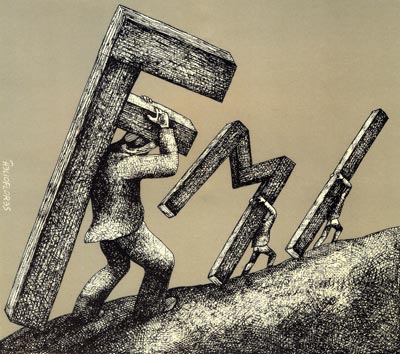 Helio Flores Viveros was born on Oct. 8, 1938 in Xalapa, Veracruz, Mexico. He studied architecture at the Universidad Veracruzana. From 1966 to 1967 he lived in New York and studied at the School of Visual Arts. He started as a cartoonist for La Gallina and El Diario de Xalapa, in 1959. In 1971 he won the Grand Prix at the Montreal International Caricature Exhibit held in Canada, He’s also been awarded in Turkey (1977), Bulgaria (1977), Greece (1977), Canada (1980), Cuba (1983), and Yugoslavia (1984). In 1986 he grabbed Mexico’s National Journalism Prize. Helio Flores is no doubt one of the greatest contemporary cartoonists.

Previous publication Nibbling at buddha’s ear Next publication Art by Excelencias: a window to the world