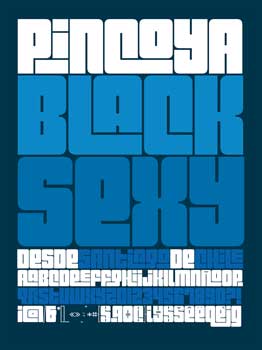 The western alphabet is probably the greatest convention our culture has ever achieved in its effort to systematize the visual arts’ communicative codes. Its enrichment and conservation have historically taken place in the huge centers of both technological and economic development –central Europe, England, and also in the U.S. since after the second half of the 20th century. From Gutenberg to date, the design of new letter types (or fonts) has run hand in hand with both the evolution of printing techniques and the knowledge of human visual perception and fashion. In recent years –thanks to the spread of increasingly accessible software, this particular discipline has reached out to every nook and cranny of the world, and Latin America has been one of the fastest–growing regions in terms of typographic production. This heyday has in a number of aspects reconfigured the cultural role of font designing in the continent.

The Latin Types Biennial got its big break in Buenos Aires back by the hand of outstanding Argentine designer Ruben Fontana. The event became the showcase for a number of creators and trends in such specific and fascinating field of graphic design. A couple of editions later, the public has for sure taken a closer look at today’s typographic realm in Latin America through similar and simultaneous exhibits in a dozen nations from across the region.

Previous publication From the screen to the “layers” in painting, or how to talk quicker about our delays Next publication LATIN AMERICAN ART WEBSITES