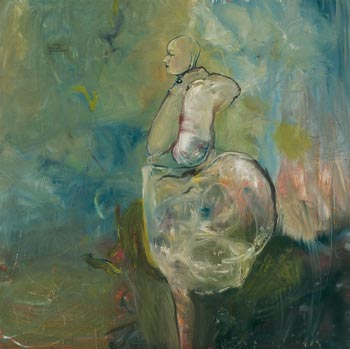 I can’t help you, bro. I don’t know it either. Though I guess it might be somewhere; perhaps right there before your eyes, under your nose, so close and mocking at you visions, at your hallucinations, at your frenzied eyes that are way too wide open. (What do you want to see? Do you really want to see?) Then it must be there, getting kicks out of your blindness, your curiosity, your impatience. Striking all the poses, making all the gestures, all at once. Pulling all the faces, sticking out her grotesque and invisible tongue in your face, wagging it an unfettered and lecherous fashion, relishing slowly, bugging you. Opening her legs to scoff at your vigor, just to humiliate you, aware that she’ll always be protected, that none of your tainted fingers could ever fondle her nakedness.

Who knows if right now she’s right behind your back, and she’s coming up and down your spine like a bored kid that drags a stick alongside a row of rusty bars, making music with each and every one of your bones? It doesn’t matter whether it’s coldness or heat what makes you shiver, if you cringe like a dry bough or quiver like a bell. Your excitement or apathy doesn’t count, nor does your fragility or your strength. (“Being too strong is the start of decaying”).

Your fear or your courage doesn’t count either, nor how slow or fast you move your limbs. After all, you’re not the one doing the walk. You’re always a piece of land to be walked on, a place to tour and stroll around. That’s why you want to become some kind of shortcut, don’t you? A fast track, an emergency exit, a dizzy trail. But who guarantees this is nothing but just another dead alley, just another terrible crossroad?

Maybe what you’re looking for is clung to you like your own shadow. And you know too well that shadow is part of you, of your body. The sacred flesh of your darkness and not a dark stain that doesn’t belong to you. That unattended, postponed shadow you sometimes mistrust, yet you’re respectful and fearful of, the one that rushes you to fill with colors as if it were the shadow of the sky, of the clouds, of a handful of flowers. Your shadow that chases you everywhere like a jealous and too faithful dog. The shadow that obediently reproduces your body, which you sometimes consider illuminated.

But it’s not something hidden. It’s way too big to stay concealed. Who could possibly waste his time in hiding it? It’s not something you can hide behind a curtain, or shroud it under a big white blanket, or put it behind a folding screen. It’s not something that can exist locked inside a house with no doors, nor bundled up in the complexity of some symbols one wise man will come later on to decipher. It’s not a monster that must be kept away from people’s sight, nor buried in the bottom of a vase. No lid could fit atop a bodiless, headless mass.

But it’s probably certain that it’s not in what you see or hear, not even in what you feel or think or sense. Though it might sometimes seem to be that way, especially in that precise moment in which someone lift your own hands for you, your pencil, your brush, and all you need to do is get carried away as if you were a disjoined puppet out of a superior force. When you body becomes a heap of borrowed clothes, in a disguise, and someone inside of you dances to that beat that is not yours. How can you say it’s you?

It doesn’t make any sense either to go finding out the whereabouts. Who could possibly tell you? A monk, a saint, a master, a priest? Sometimes it’s more prudent to go deaf, Carlos, or at least to turn a deaf ear. None of them has been able to eat their own tongues. (“Where can I find a man who has forgotten all the words? I’d love to talk to him”). So, their answer is always going to be the same: here it is. But you know it’s all a lie. His true house is nowhere. It’s not. Probably it never was. Plain and simple. And this, far from being a drawback, is quite a genuine advantage, a relief. Because if that’s so, then you can pour all of your energies into a nonstop and fruitless quest, move around completely happy, with euphoria, with gloominess, with desperation. There’s plenty of wiggle room all along and across the space. Move on, back up, turn around, become a senseless whirlpool, dance inside the eye of the storm. Or stay put, motionless, and finally imagine that –whatever it is– has finally come. Get the idea that it’s just come for an instant to whisper it in your ear, to let it in on you, just you, to tell you the things that go unsaid, to explain the inexplicable. So, you can have all the time you want. You may leave your candle burning until it almost dies out because there’s always time to spare, all the time in the world. 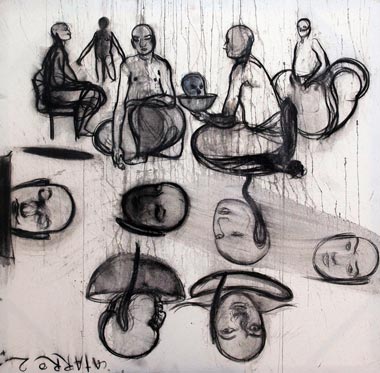 In the meantime, you can show others everything you don’t know, what you ignore, what you want to know, decipher and interpret. You can draw it or paint it. Fill in that ignorance with colors. Reveal it true name. You can say its name is wonder, truth, knowledge, beauty, pleasure, magic, whatever comes to your mind. You can reveal all its secrets. What secrets may the unknown hide? Those who are out there are going to claim their share and they’ll be pleased to whatever crumb you give them. Dole out, be kind. Let the sack go empty. That wealth will never run on empty. You may proudly showcase the upshots of your search, your jaw-dropping findings. Lift them like victorious trophies, put them on the top of your head like red feathers in your hat. You dazzle and fascinate, say that you’ve got it, that this is it. You can seduce, I mean, mislead. Promise the impossible just knowing that you won’t make good on it. Or on the contrary, you can wreck everything. Burn it all, blow the ashes on our faces, stay alone, say that you’re not there either, that you’re blind, that you were blinded by the light. And then go humming that strange melody as you walk in and out, staggering on the pitch-black darkness.

2- You watch your own head fly, the head you picked, not the one of that miserable that came rolling down to your feet, cut off and placed in the dirty basket of mocking, revenge and punishment. Nor the venerable head that someone has come to present with respect on the mat. It’s not the head of forgiveness and resentment. It’s never somebody else’s head; it’s always your own head, just one among all the possible heads. It’s only your head that’s being lifted, that floats, that flies in the middle of the night like a bird, watching everything from the air. It’s the one that disappointedly finds out that everything is small, ordinary, insignificant; that everything is heavy, dense, incapable of levitating and standing up against the punishment of gravity. It’s always your afflicted, anguished head the one that refuses to rest on your body because it feels that your body is still a rickety bough about to snap. An uncomfortable and makeshift nest. Your head is still addicted to vertigo, enamored with the large spaces, with emptiness and solitude. Your stubborn, distrustful head resists to admitting that it once was a solitary but worthless divinity. And it flutters continuously and it doesn’t want to be a part of your body. It’s not someone else’s head; it’s always your own head, the head you picked for you.

3- Your training has been tough, exhausting. You learned to beat a nearly endless number of foes, all different, all powerful. Each and every one of them with their weapons, their styles and tactics. You studied their weak and vulnerable points. You grew to know all their ruses. Neither one of them was ever a real threat. You went all their dirty tricks one better. You guessed their most secret plans. No attack ever caught you off guard. Hardly ever someone turned his back on you, though many times you had to be drastic, ferocious and ruthless to prevail. Losing was never a choice for you. But now the battle has begun to turn puzzling and foggy. 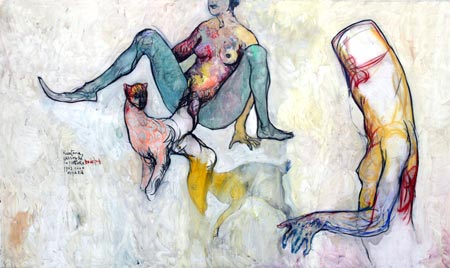 Mainly because there are barely any contestants left, or it’s just because you no longer wish to defeat anyone.Sitting in front of the mirror, though, you try once again to sharpen your sword. There’s no doubt that you’re still a warrior, aren’t you? No victory has ever left you completely satisfied. It’s never been the big win of your lifetime. You pound your own chest and cheer yourself up. Yet, your weapons are suddenly becoming old, worthless and ridiculous. You feel that this time around your old strength won’t be good enough. You have not been trained for your next battle and fear has begun to sneak up on you. The danger is enormous and you know there’s only one enemy standing, just only one enemy. And you hear his threats as chills go up and down your spine: “You can’t beat me without being defeated.”

4- Of course we’re going down the drain. We’ve lost direction. No star is our beacon anymore. We invent clocks and compasses to no avail. The universe is pleasantly laughing at our calculations, at our childish cardinal points. Our notions of space, time, infinity and eternity only entertain our ignorance, our fearfulness. And chances are it’s pretty unlikely that there was ever a god up in the heights –or down in the depths– destined to showing us a better way. Why should he do that? We find comfort in the notion that perhaps he’s been distracted or attending to other issues. But truth is we have no perks, no priority at all. The universe has not been designed to please our desires. We are there, just like everything else. If we want to talk with the cosmos, with the unknown, with art, with ourselves, we should put both our feet on all the places at the same time. Watch –and be watched– from all points, from all the angles. We must abandon our rudimentary perspective. Isn’t that what you’ve been trying to tell us? It’s not that the world doesn’t make head or tail, or just about everything is upside down. There’s no up and no down, and no sides either. There’s no before and no after. Everything is head and tail, beginning and end. And it’s always been that way. So sorry if we haven’t understood that or we’ve just forgotten about it.