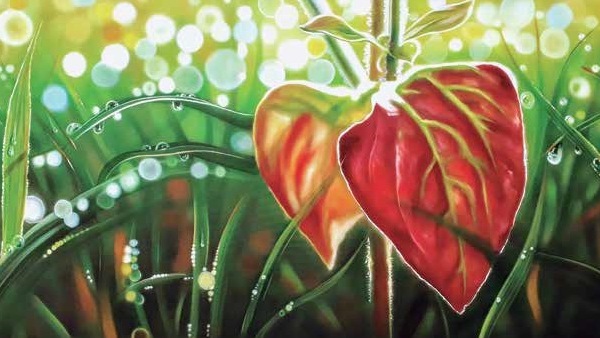 Urgent messages from the water painter

So when I arrived at the opening of “Bajo el mar...no todo es azul” (Under the sea…not everything is blue) on the afternoon of June 5, I had already enjoyed certain charms of his new plastic work. But it was no more than some part. Only when I “sailed” over the walls of the transitory hall of the Memorial, immersed in the smell of oil and the dialogue of the works, could I fully perceive the urgent messages of Silvio Martínez Cabrera.

With a canvas under the same name of the exhibition, the blue half begins and so did the speech that this new work focuses on. They add meanings and senses: En la cuerda, SOS, Contaminación, Desde lo profundo SOS y Bajo el mar no todo es azul II. Three of the metaphors "hang" with clips on a string: a world like a plastic bag, three jars containing the messages that the sea commissioned him to paint, and a submarine line of plastic bags. As in the installation “Contaminación,” a clear reference to the chaos generated by the unbridled consumerism of the human species.

At the end of this "dramatic" shore, whale tails are sighted on a blue plastic bag, an image that reminded me of the shocking news of the dead whale with forty kilos of plastic in its stomach. Then I think that life arose in the sea and from there the end may come. Perhaps from the twilight – submarine - the boat with which Silvio touches on another pressing contemporary problem is observed: emigration.