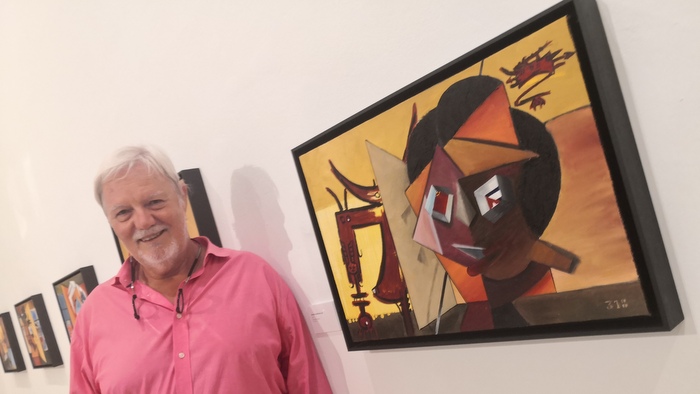 Willy L'Eplattenier fills the Institute of America with cubist works

Until October 3, the Santa Fe Institute of America hosts the exhibition "Paintings and Sculptures", by the cubist painter Willy L'Eplattenier (Chaux-de-Fonds, 1953); The first major retrospective of the Swiss artist, based in Spain.

Some paintings have been made ex professo for this exhibition, which reflects the "Spanish years" of Willy LP, an economist who grew up "surrounded by paintings and the smell of turpentine," because his grandfather was Charles L’Eplattenier, teacher of Le Corbusier and one of the best representatives of Art Nouveau in his country.

One day, Willy definitely changed the calculators for the canvases and began painting as Gris, Braque and Picasso did more than a hundred years ago. Since then he has worked “without rest”, so much, that he has managed to fill the great rooms of the Institute of America, although his works are not large format.

In total about seventy paintings and sculptures have been hung, dating from 1997 to 2019. However, there is a chronological void in the early years, because many of his works from that time remain in the hands of his previous wife.

What can be seen in this retrospective is a 2017 series that pays tribute to the avant-garde of the twentieth century. Each canvas carries a reproduction of the artist's work and a portrait of himself; in its cubist form, of course.

It is an unfinished series - waiting for new ideas - and, so far, it consists of about fifteen pieces starring an anonymous painter, Picasso, Warhol, Basquiat, Magritte, Torres-García ... and even the Cuban Wifredo Lam.

In fact, there is a painting that, when we interviewed Willy LP in his studio, in 2018, was portrayed by our camera. After our visit, the painter covered the entire canvas of black and started again. Now we find it funny when he tells us that this work has only remained in the pages of our magazine Arte por Excelencias.

The sculptures, on the other hand, are also cubist, and are made of metal, such as "Man in the world (2015)" or the so-called "magnetic", made of wood and methacrylate, which defy the laws of gravity.

As usual, the Institute of America of Santa Fe (Granada, Spain) has published for the occasion a beautiful catalog with the works of the exhibition and texts of the critic Jean-Cristophe Blaser, the art historian Mónica Salcedo and the writer and journalist Gregorio Morales.

On the cover: Willy LP with his painting tribute to Wifredo Lam