ESTAMPA International Fair of Multiple and Contemporary Art, dedicated to exhibiting, marketing and promoting visual arts in every editable aspect, from engraving to video, through photography, will kick off at IFEMA fair facilities, in Madrid, October 20 to 24.

In this 18th edition, there will be more than 80exhibitors from different countries, displaying over 3,000 works made by acclaimed names and young artists. There is a high level in the galleries, many of which are participating again in ESTAMPA as market platform: Marlbourgh, Estiarte, Cayon Gallery or Moises Perez Albeniz, among other. It stands out the personal exhibition of Jose Pedro Croft –invited artist–, one of the renovators of Portuguese sculpture whose work blurs the limits of multiple art concepts.

Keeping the assumptions seen in previous editions, the fair will have a special focus on the photography world, with proposals by specialized galleries such Sicart, Camara Oscura, Spectrum or Valid Foto. The 2nd Edition of Photography ESTAMPA Award has been called, with the collaboration of Taller Digigrafico, which envisages buying works to galleries included in the general program. Likewise, ESTAMPA-Comunidad de Madrid Award will have its third edition, also including the acquisition of works, any multiple art technique. 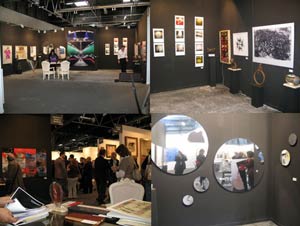 A true novelty turns to be the widening of the Fair’s activities to locations out of IFEMA’s fair facilities, with the creation of a video program –organized by Jose Mª de Francisco (Madrid, 1969) – along with the National Auditorium which puts in the map the relation between fine and music creation. It’s followed by a video-installations exhibition (October 16 to November 16) within the common areas of Auditorium building. The VIP Collectors program is particularly attractive, on its first edition, including a series of activities specially designed for this audience, a strategy already applied in other fairs.

Organizers have also decided widening the temporal reach of the event, providing a visibility that goes beyond the four days of physical contact with the audience in Madrid. That’s why the www.estampa.org web has been launched, in order to put the Fair in the vanguard of e-commerce in Spain’s art sector, taking advantage of the potential of new technologies and network society.

There is no doubt that ESTAMPA, with an annual volume of 40,000 visitors, is consolidated as one of the main marketing and diffusion channels for contemporary art.