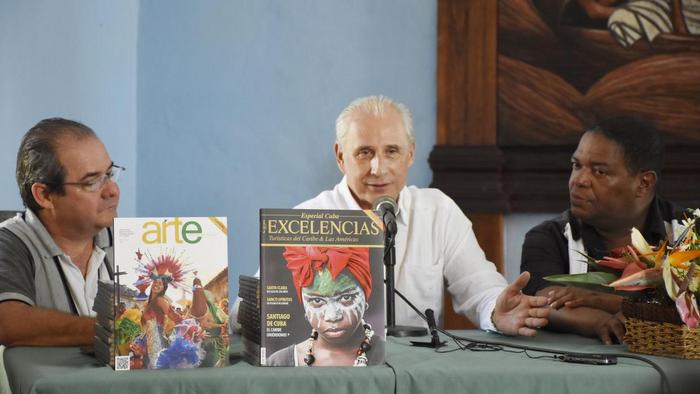 With the presence of Mr. José Carlos de Santiago, president of the Excelencias Group, issue 169 of the Excelencias magazine, whose content is dedicated to the 39th edition of the Fiesta del Fuego (Fire Festival) was presented Saturday at the Chapel of the Curatorship Office of the city of Santiago de Cuba.

As it always happens during these first days of July, the presentation of the magazine will take place in the heat of the Caribbean Festival, the birthplace of the magazine back in 1997. That explains the significance this particular celebration has for the Excelencias Group, which this time around has chosen the Republic of Uruguay as the guest country of honor.

In the pages of issue 169, readers will find interviews with Orlando Vergés, president of the Organizing Committee of the Fire Festival, and with the Hon. Mr. Eduardo Lorier, Ambassador of the Republic of Uruguay to Cuba, a nation from which you can now learn more about its history, culture, gastronomy and more.

In any case, it is the opportunity to get closer to the greatness of Santiago de Cuba and its people, starting with its 50 national monuments and its three World Heritage sites listed by UNESCO, which make the city proud to showcase its half a dozen outstanding cultural landscapes.

Along with the monthly sections of the magazine, such as Camino de Santiago, Havana 500 and others, issue 169 puts a significant spin on the 505th anniversary of Villa del Espiritu Santo and the 330th birthday of Santa Clara.

Next publication Wide cultural diapason at the FIC Gibara 2019