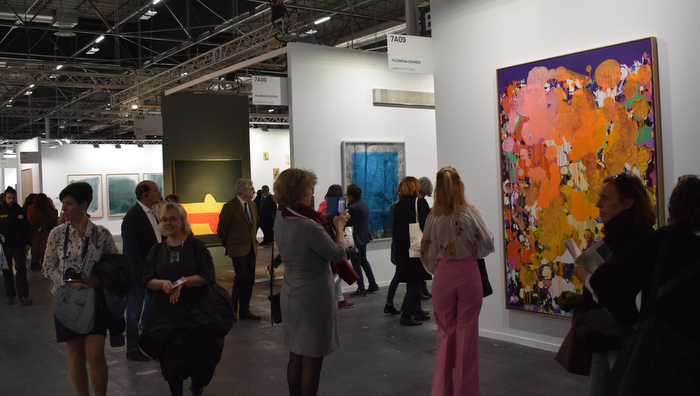 The 39th edition of the contemporary art fair ARCOmadrid closed its doors this Sunday with a very positive balance and a high sales rate. And although visitors have dropped 7%, till 93 thousand, critics believe that it has improved the quality of the works and selected artists, which has attracted more national and international collectors.

The drop-down of visitors was expected, for fear of contagion with the coronavirus - of which there are already confirmed in Spain more than a hundred cases. However, among the galleries (209 from 30 countries; 11 Italian) and guest collectors there were no major cancellations.

Masks were barely seen in IFEMA pavilions and people approached artists and gallery owners with the usual naturalness. Also, as usual, the Kings attended the inauguration, and even visited the stand of Massimo and Francesca Minini, of the Lombardy region, one of the most affected by the epidemic in Italy. 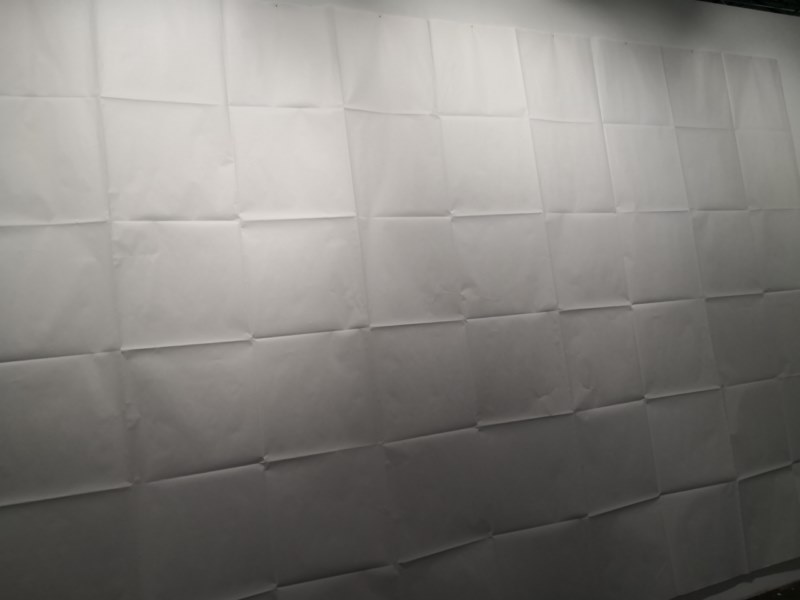 What has not gone very well has been the special curated program It’s just a matter of time / Es solo cuestión de tiempo, which was dedicated to the influence of Felix Gonzalez-Torres (1957-1996) in contemporary artistic practices. More noise than nuts, it could be said, because the peculiar form of the Cuban to turn pain into art gave more than a handful of balloons or letters scattered on the floor, an immense sheet of paper with folds or a three-colored canvas that they simulate the corner where the artist left his mountain of candies ... 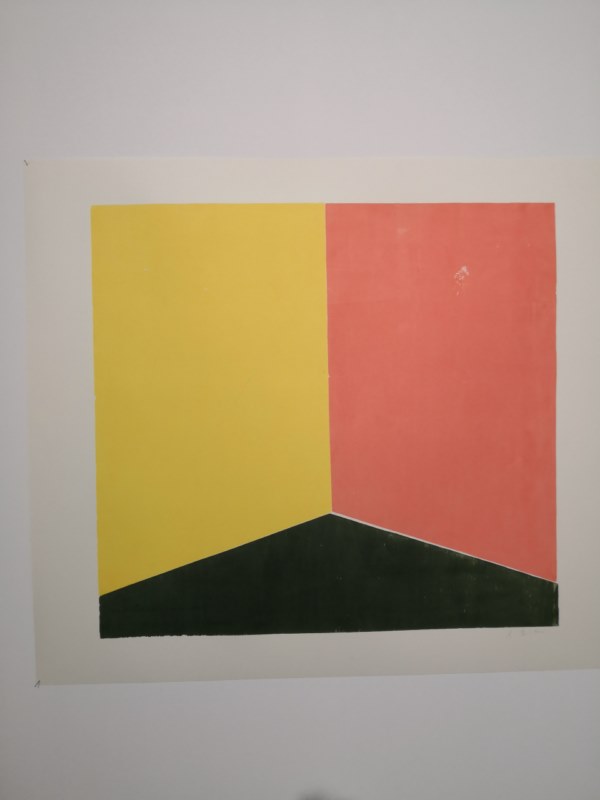 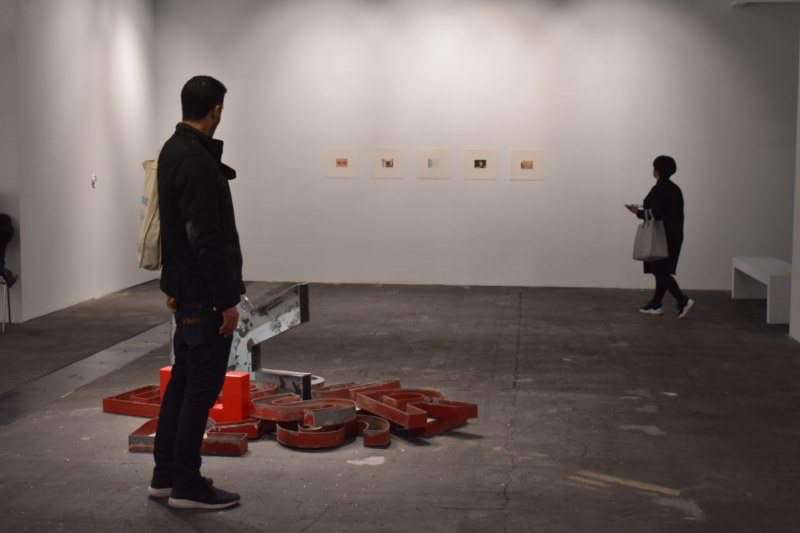 Even outside the section you could see the influence (or not) of Gonzalez-Torres, as in a part of the installation of Madrid's Alvaro Urbano, where letters were piled up before a closed door, or even in the mountain of colored pink candies (Placebo Rosa), wrapped in the flag of Spain, with which the Guatemalan Esvin Alarcón wanted to pay tribute (while denouncing the Spanish colonization in America).

As usual, there were in ARCO firms listed in millions of euros. The mecca of the great masters of the avant-garde and modernity was at the stand of Madrid's Leandro Navarro, a small museum where you could find from a Kandinsky, Miró, Dalí or Tàpies to a mobile sculpture of Calder (Frère), valued at 1, 8 million.

While in the New York firm Edward Tyler Nahem there were works by Lam, Rauschenberg and Lichtenstein, in addition to a Picassian Portrait of Jacqueline, the most expensive of the fair (6.5 million); followed by the great sculpture of Chillida that led the Swiss gallery Hauser & Wirth (5 million).

But we also saw many more decorative than artistic pieces, especially among those that were suspended from the ceiling: tropical plants, exotic animals, talkative spectra, fishing nets ... and even absurd, like lighters in love, decapitated dolls, oranges with eyes, Lettuce, sand cars or a futuristic motorcycle with neon lights.

In the general program two Cuban spaces have coincided. On one hand, The apartment, with its usual photographs of Leandro Feal and Reynier Leyva Novo, Diana Fonseca's paintings and a pair of wood sculptures by my countryman Orestes Hernández, as well as other pieces by Alex Hernández, Ariamna Contino, Ezequiel Suárez and Levi Orta.

And the socio-cultural project Dedelmu (Behind the Wall), curated by Juan Delgado, where two Fabelos stood out: one monochromatic, recognizable from a distance, and another in the form of Spiral, full of color ... two faces of the same saga of artists: Roberto Fabelo and Gabriel Fabelo Hung. There were also pieces by Rachel Valdés, Adonis Flores and Elio Jesús Fonseca, among other artists of the island who usually participate in the Havana Biennial.

One of the Latin American galleries that has attracted the most attention this year has been the Guatemalan Ultraviolet Projects, which participated in the Dialogues program with Hellen Ascoli and Naufus Ramírez-Figueroa. This "space for experimentation in contemporary art" received the Iberia Dialogues Prize - which is awarded for the first time - and also the XIII illy SustainArt Award, which recognized the creations of Hellen Ascoli, where textile and contemporary traditions merge.

In her works, inspired by the eruption of the Volcano of Fire, the Guatemalan based in Wisconsin pays tribute to the artisanal figure of the female weaving artists of her country. Each piece, elaborated “with a base of woven fabric on a waist loom, cotton, found fabric, hand-sewn cotton or on designed hooks”, responds to names of poems such as “Where we crouch in love”, “Stone women or where stones come to life” or “Sometimes the sky opens”.

For its part, the ARCO-BEEP Electronic Art Prize selected the work “Prosopagnosia”, by the artist Joan Fontcuberta (Àngels Barcelona gallery). While the fourth edition of the Alhambra Beers Award for Emerging Art went to Irma Álvarez-Laviada, for “Plano y vertical. Pedestal N º 0”

And among the usual proposals of the main Spanish newspapers, we highlight that of El País, very sober in color but very deep in content. Only ten words, closely linked to politics and the media, that degrade before the eyes of the visitor until they volatilize. "Words are also an art form," confirms the Catalan artist Antoni Muntadas (resident in New York since 1971), who has built this space with the help of architect Juan Herreros.

From February 24 to 28, 2021 ARCO will celebrate its 40th birthday, without Chile as a guest country as its organizers wanted, due to the political situation of the Latin American nation; although they already work on an alternative that will be announced soon.