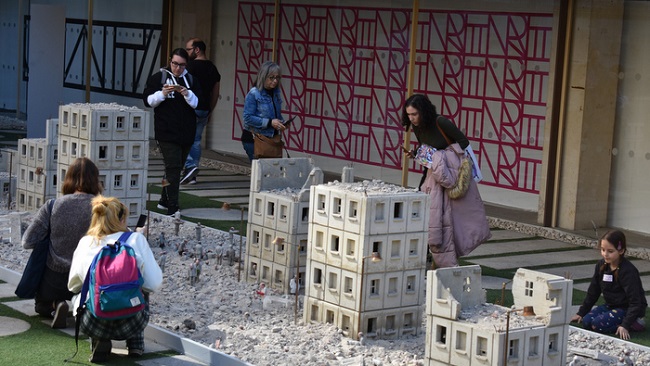 Urvanity at the Art Week in Madrid

The third edition of Urvanity is already history. The first Spanish fair dedicated to New Contemporary Art went through the Madrid art week as a tsunami, filling not only its headquarters in the COAM but also the streets and walls of the Spanish capital.

From February 28 to March 3, some of the best urban artists of the world could be seen here, either in the stands of the 23 participating national and foreign galleries, or in the Solo Shows of the new Commissariat Program, which also had, facilities distributed throughout the city and murals made expressly for a Fair, of which Arte por Excelencias is a media partner.

The central building of the College of Architects of Madrid, with almost 1000 m2 of exhibition space, comes as a ring to this event, which has made the most of its special architecture and this year has created a tour that allowed you to see everything - difficult thing in art fairs, where there is much to see and usually, little time to do it.

At the entrance welcomed eight galleries, which featured the series of paintings of Moneyless, in the Italian Doppelgaenger; some strange faces (from Grip Face) and a small man inside a cage (by Isaac Cordal), in the Bilbao SC Gallery, as well as the oil paintings full of cartoons characters (from Laurina Paperina), in the also Italian Martina's Gallery.

Then, with a refreshing Mahou in hand (for something the brand of beer from Madrid is one of its sponsors) you entered the multicolored world of Okuda San Miguel, which this year still gives you something to talk about, and nothing less than the special project "The rainbow Mountains", an important collection of unpublished paintings and sculptures, with which the Santander artist returns to his most surrealist period.

After the enormous inflatable head of Okuda, the "Solo Shows" were hidden, cured by Sabina Chagina (co-founder of the ARTMOSSPHERE Contemporary Urban Art Biennial, in Moscow), Sergio Pardo (architect and curator) and Juan Peiró (Doctor of Fine Arts and Professor of the Faculty of Fine Arts at the Universitat Politècnica de València).

Four different ways of working urban art, but as a whole give an idea of ​​where contemporary artists move: from the geometric pieces of the Czech Jan Kaláb (Magma Gallery) and the monochromatic human figures of the Spanish Sam3 (Doppelgaenger), going through the recreation of the urban life (rather the urban night) of the pioneer of the New York street art Dan Witz (Wunderkammern), until arriving at the "Muses and warriors", of the French Miss Van (Fousion Gallery).

At this moment we pause at the first installation that Mahou has prepared for Urvanity, a stand where you can not stop making the photo that will be the best souvenir of this fair. Dressed completely in red, you merge with the space ...

Then, we immerse ourselves in the great installation with which the Penique Productions artists have dressed the conference room of the COAM. We will return to this "Mahou Space" a couple of times, because it will be the scene of the BSA Talks, a program of talks and round tables curated by the New York project and urban art magazine Brooklyn Street Art, which will talk about hacker activism, intellectual property and other relevant issues that affect the urban art scene today.

Through the corridors we see Ampparito, one of the artists that Arte por Excelencias interviewed in Granada, when the Tuenty Urban Art Academy went by; to Okuda we caught him talking with the DJ in the Mahou Space and, to Miss Van, dressed in a print animal costume, in Fousion Gallery (Barcelona).

Interesting also the series "De vagos y malesantes", by Matías Sánchez, in the stand of the Canarian gallery Manuel Ojeda, as well as the work by Hendrik Czakainski, at the Berlin-based Urban Spree, which on Saturday already had the poster "Acquired by the María Cristina Maseveu Peterson Foundation", an organization from Madrid that also went shopping for ARCO, especially at the Elba Benítez stand.

Urvanity also serves as a showcase for young artists, as evidenced by its Tuenti-URVANITY ART New Contemporary Art contest, aimed at students of Spanish Fine Arts, whose schools this year gave lectures and painted murals.

Outside the walls of the COAM the Fair also followed. During the previous days, and in collaboration with Madrid Capital of Fashion and the footwear firm Coolway, they appeared in important commercial areas of the city, some facilities that aimed to bring contemporary art to the general public.

The Spanish Juan Miguel Quiñones put a marble pole of 3.05 meters in Alonso Martínez; and his fellow Sabek, one of his classic black fiberglass panthers, in Callao. While the Italian Moneyless created a facility based on wool and thread in Augusto Figueroa and the German 1010 a giant " trampantojo" that, like many of the works of urban art, was quickly destroyed by passers-by in Fuencarral.

But the most impressive of these actions was "Following the leader", the great model of the Galician Isaac Cordal, in the courtyard of the COAM. A city in ruins (which perhaps has been destroyed by war, by human ambitions or by our "devalued relationship with nature"), inhabited by small concrete men, destroyed, lost eyes of some people who cling to God knows that ... beautiful and overwhelming at the same time.

Also, since this weekend Madrid has four new murals, made in collaboration with Tuenti Urban Art. The artists who participated this year have been the Mexican Poni (Plaza Puerta Cerrada), the Russian Marat Morik (Santa Isabel, 18), the Frenchman Pro176 (alley of Tribulete) and the Serbian Artez (Fuencarral, 31).

In the opening words of the Urvanity 2019 catalog, the fair was intended to "shake, take risks ... be part of the tsunami that is moving the new contemporary art." In this sense, we believe that the fair is consolidating as a unique space within the Art Week of Madrid.

In short, with Urvanity 2019, it has been as if a true color tsunami crossed Madrid and will leave indelible marks in the city, in its people and in the thousands of tourists who pass through it every day, something that ARCOmadrid should take note.

On the cover: Patio del COAM, with the model of Isaac Cordal