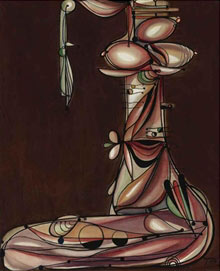 Thru Nov. 12, the La Acacia Gallery in Havana will be presenting an exhibition that combines proposals by two of the most outstanding figures of Cuban abstraction: Jose Maria Mijares and Lolo Soldevilla.

Mijares, a former professor at the San Alejandro School of Fine Arts, worked basically as a painter, engraver and drawer. In the 1950s, as a member of the Ten Concrete Painters Group, he started trying his hand at a formal viewpoint, a reason why he’s been considered a harbinger of

geometric abstraction in Latin America and one of the most significant painters within Cuban artistic avant-gardism. Mijares left us a vast legacy of artworks that combine abstraction with idyllic, intimate and gloomy figurations.

Lolo Soldevilla could be labeled one of the major representatives of the geometric abstractionist trend and kinetic art, taken on by the artist from the willingness of experimentation and without breaching any established guideline. As Mijares, she was a member of the Ten Concrete Painters and founded the Color-Light Gallery together with Pedro de Oraa. Her great astral compositions –she called them the celestial letters- are the result of a great imagination that stands out for the layout of elements and the highlighting of colors.