Considered by many as the leading Spanish fair, ARCOmadrid put forth last November 18 its project for the fair’s 30th edition. Caribbean News Digital learned exclusive details in an interview by our CEO Jose Carlos de Santiago to Carlos Urroz. Up next, a preview of what the fair will be like, according to the press conference.

This time, organizers have gone for a reduction in the number of participating galleries in an effort to offer a more compact and suitable event based on current conditions and to favor exchange and professional contacts so that galleries have greater possibilities to achieve their business goals.

The general program consists of 117 galleries that will exhibit historical avant-garde pieces, contemporary classics and present-day art.  For the ARCO 40 section, other 35 exhibiting spaces were conceived for the presentation of three artists at the most on each of them. Focus Russia adds up to those spaces with 8 galleries selected by Daria Pyrkina –co-director of the National Centre for Contemporary Arts and professor at the Moscow State Lomonosov University. The galleries will be strategically located across the pavilions to facilitate exchange among curators, gallery owners and artists. Having Russia as guest country in 2011, ARCOmadrid hopes to show Russian current art facilitating its repercussion in Madrid. In 2011, Spain celebrates the Year of Russia and vice versa the fair has committed to strengthen cultural bonds between the two countries.

Solo Projects: Focus Latin-American, sponsored by Spanish international cooperation agency for development AECID and curated by Luisa Duarte, Julieta Gonzalez and Daniela Perez, is another of ARCO 2011’s novelties. It is dedicated to up-and-coming creators presented by 14 galleries

The Opening program is another fresh idea proposed by the upcoming fair: Young European Galleries, coordinated by independent curator Maribel Lopez, will bring together 20 spaces younger than eight years from different nationalities. 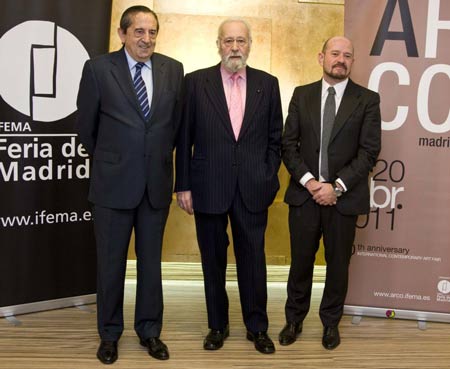 The fair’s spotlight will be definitely turned on galleries and its projects since Performing ARCO, Expanded Box and Cinema programs have been eliminated from the 30th ARCOmadrid. However, debates and professional meetings will continue to have a privileged place within the event. It will host a series of six working meetings led by two specialists who will lead the exchange of opinions and projects, as well as the interrelationship between galleries. The program will include: La producción de artistas by Chus Martinez, Chief Curator of Barcelona’s MACBA; Curating emerging artists (Comisariando artistas emergentes) led by curators Mariana Canepa and Max Andrews –Latitudes-; What images today? (¿Qué imágenes hoy?) with Marta Gili, director of Jeu de Paume of Paris; Biennale Break led by Adriano Pedrosa, independent curator from Barcelona; and Latin America (Latin-American), organized by Hans Ulrich Obrist, co-director of Exhibitions and Programs and director of International Projects, London’s Serpentine Gallery; and Dinosaurs? Are the powerful institutions of modern and contemporary art able to efficiently face the current artistic climate? ( ¿Dinosaurios? - ¿Son las grandes instituciones de arte moderno y contemporáneo capaces de enfrentarse con eficacia al actual clima artístico?) by Lynne Cooke, Conservation, Research and Publicity deputy director at Madrid’s Museo Nacional Centro de Arte Reina Sofia, Spain’s national museum of 20th century art.

The Forum will be opened to the public and will feature round table discussions about collecting. It will feature a series of lectures organized by Daria Pirkyna with intellectuals, artists, philosophers and members of the most active foundations of the countries in attendance. The program about collecting will include round tables named Collections, me and the World (La Colección, yo y el Mundo), and Expanded Collections (Colecciones expandidas), sponsored by the Banco de Santander Foundation and led by Rosa Martínez, former curator for Venice Biennial. Likewise, other debates among international collectors and specialists in the field will be led by Alexandre Melo and Francesca Thyssen. An open forum with interesting contents such as that of site specific, organized by Matadero, and others coordinated by Goethe-Institut and Menene Gras will be also available.

As a support to the economic management of participating galleries, the Fair maintains a program for international collectors. The program consists on providing a space not only to those holding solid and recognized collections, but also to collectors with potential, art lovers, through the First Collector project, an initiative led by Elisa Hernando, director of Arte Global consultancy firm who will offer investment consultancy services. As a complement, prestigious institutions such as Maison Rouge from Paris and Association of Collectors from Portugal will participate.

To mark its 30th anniversary, ARCOmadrid is preparing a special program of activities for gallery owners, artists, collectors, curators, institutions and art lovers visiting the Fair, scheduled from February 16-20. One of the principal actions will be an exhibition of the best photos taken on each ARCOmadrid Fair. The display was organized by Andrés Mengs.

Arco’s Sala Amigos, with an area of 300 square meters, will be set up to look like a collector’s apartment. It will be decorated by Becara with works acquired by the Coca Cola Foundation over the last 15 Arcomadrid fairs.