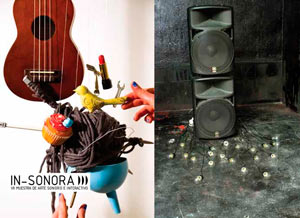 Favaretto’s piece is titled C.I., and when viewers come closer a series of noises are activated, which are turned, through a transformer, into energy that recharges a series of bulbs. “My intention was underlining the importance of the body as life presence […] At the same time, I want to establish the similarity between body and art. Setting art as an interference or noise that unexpectedly breaks into a known environment or space […] Art with its interference is a way of penetrating the private space and distort it or cancel it”, Mery said.

This installation is framed within the activities of IN-SONORA, a platform created to provide support and shed light on experimental artistic proposals, organized by Maite Camacho and Betania Lozano. Beyond this venue at Twin, there are other project exhibited at Reina Sofia Art  Center National Museum, Matadero Madrid, Casa Arabe, Medialab Prado, IED – Instituto Europeo di Design Madrid, Off Limits, Espacio Menosuno and Espacio Trapezio.

On the other hand, Twin Studio & Gallery is going to inaugurate, during the first two weeks in April, Argentinean artist Eduardo Bertone’s Puke, a selection of illustrations, paintings sculptures and one mural, created with acrylics, aerosol, markers; and collage on canvas, paper, wood and recycled materials. It’s all about an interpretation, from humor, of the contemporary. 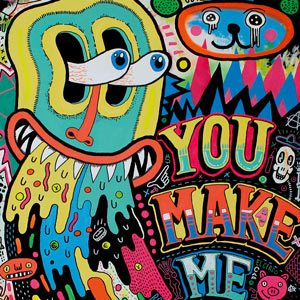 From Thursday April 12 to May 4, viewers will have access to the creator’s latest production, which recreates “a world of contrapositions between the real and the oneiric, between suffering and joy”.