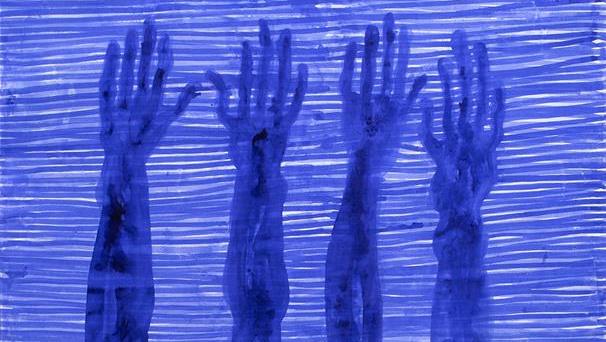 After being unveiled at South Korea's Busan Biennale in 2020, a set of eight new large blue paintings, Partages I -VIII, and an interactive installation by the Cameroonian artist Barthélemy Toguo are presented at Galerie Lelong & Co.

Deeply influenced by the work of the the Egytian-born, French writer and poet Edmond Jabès (1912 - 1991), Barthélemy Toguo explores the themes of tragedy and genocide, exile and wandering in these new works. This exhibition reveals how he has reflected upon both the thinking of Jabès and a mythical story of the Bamiléké people in present-day Cameroon.

Born in 1967 and based between Bandjoun in Cameroon and Paris, Toguo has been directly inspired by Jabès' The Book of Shares (1987) and what it represents. In his new series, Toguo alludes to these principles through the prism of the legend of a Bamiléké deity. According to the legend, the deity – seized with anger – heads out at nightfall to distribute his tears, sorrows and misfortunes in order to punish those who dared to transgress common values.

“This year marks the 30th anniversary of the death of Edmond Jabès, the poet and writer of African (Egypt) origins. His work has never ceased to enlighten us. With his questions and formulations, Edmond Jabès is in harmony with my vision of the world, and his work resonates with my artistic practices. A complicity of thought emerged when reading his writings. Learning more about the world of Edmond Jabès, particularly his “Livre du partage” (The Book of Shares) inspired me to conceive an artistic proposal during the Busan 2020 International Biennale in Korea; this resulted in a series of 8 paintings entitled Partages I – VIII.

My personal exhibition at Galerie Lelong & Co. in September 2021 will continue the work started in Busan in 2020. This project, which consists of a series of blue paintings produced in 2020 and 2021, will include a brand-new interactive installation: the public will be invited to make a material donation or send a paper or electronic message.” - Barthélémy Toguo

The Bamiléké are a socio-cultural group who live in the highlands of West Cameroon. A Bamiléké chiefdom is a sort of micro-state centred around a powerful King enjoying the power of a semi-divine being.

Around the idea of partage (sharing), the artist Barthélémy Toguo has created links between the writer Edmond Jabès and the Bamiléké people, though their shared African origins, genocide, wandering and exile. Barthélémy Toguo was inspired by a legend of the Bamiléké people relating the fury of a divinity who, as night falls, puts on huge shoes and laden with parcels, crosses the land handing out tears, chagrin and misery as punishments for those who have contravened shared values.

A humanist, Barthélémy Toguo has taken this legend and adapted it to his own values of listening, forgiving, hospitality and sharing. Thus, the divine fury becomes a driver of generosity and the “remodelled” Bamiléké spirit performs its nocturnal wanderings differently, more peacefully, handing out riches of all sorts to help lead the world to a better destiny.

Barthélémy Toguo was born in 1967 in Mbalmayo, Cameroon. He lives and works in Bandjoun (Cameroon) and Paris.

The artist has recently been commissioned to produce four doorways for the Musée Rodin (Paris).