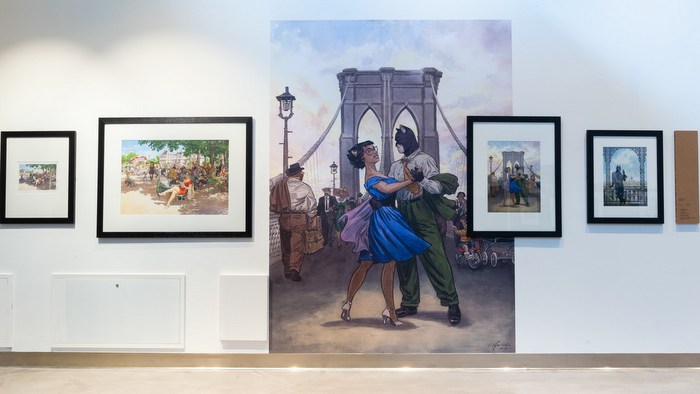 BLACKSAD: The colours of noir Juanjo Guarnido at the PAFF! gallery in Pordenone

The PAFF! (Palazzo Arti Fumetto Friuli) gallery opens its doors for the new exhibition of Juanjo Guarnido, from 8 April until 10 July, at Viale Dante 33, Pordenone. The exhibition has been organised in collaboration with 9eme Art Références in Paris, continuing their partnership following the resounding success of previous exhibitions featuring Milton Caniff and Marvel & DC masters.

The artist's new exhibition will be inaugurated on 7 April and will be open to the public from 8 April to 10 July at PAFF! - Palazzo Arti Fumetto Friuli in Pordenone, surrounded by an enchanting park and rose garden, where the artist's works will be hosted for three months. Giulio De Vita, the Artistic Director at PAFF! (Palazzo Arti Fumetto Friuli) had this to say: “With this Guarnido exhibition we are bringing a star of contemporary comics to Pordenone, as well as one of the brightest and most original talents on the international scene. Rich in artistic, literary and cinematographic references, his stories captivate with visual power, narrative effectiveness and expressive impact." He added: "Each of his scenes combines these three components quite naturally, making an extremely difficult technique mastered with tireless study appear simple, a characteristic that can only be attributed to one category of artists: true masters”.
And we are talking about a true master here: animator, cartoonist and illustrator, he excels in his watercolour drawings and in the creation of mysterious and captivating worlds. An eclectic contemporary author, whether in the shadows of dark alleys or under the bright lights of New Orleans, the master's brush works miracles. The imagery is again accompanied by texts from Juan Díaz Canales, whose artistic partnership with Guarnido has lasted for three decades. The two authors skilfully draw the reader into the heart of 1950s New York, which hosts stories freely inspired by the classics of American detective stories and film noir. More specifically, in the final chapter, the detective investigates the affairs of American organised crime.
“This new and original exhibition at PAFF!” — notes the Regional Councillor for Culture Tiziana Gibelli — “pays tribute to one of the most prestigious Spanish animators, cartoonists and illustrators, whose work has left an important mark on many experts and enthusiasts in the field. The choice of Guarnido is a very interesting one, because the author, through his drawings rich in cultural references, also leads us to reflect on current events in the society in which he has lived. A society, that of the twentieth-century United States, strongly marked by the Cold War, which, in some ways, has sadly returned to the fore with the war in Ukraine.”
Alberto Parigi, Councillor for Culture for Pordenone City Council, stated: “This Guarnido exhibition confirms the international scope of PAFF! Few cities can boast a cultural and creative structure of this kind. The challenge now is to further embed it in the local community and to consolidate it as a point of reference nationally and internationally. The municipality, for its part, has supported the creation of the gallery and will continue our fruitful collaboration to achieve these goals."
The eagerly awaited return of the famous ebony-haired feline in his camel-coloured trench coat also demonstrates how the author is not afraid of exposure to a more prudish overseas audience, producing a new and original work, which, through his unique use of animal characters, makes a statement in the world of comics, focusing on the murkier themes of violence and eroticism. Also, for the first time the story is split into two parts, with the epilogue scheduled for release in the second half of 2023.
The success of the series is such that it has been translated from the original French and Spanish into more than twenty languages, and is now published in Asia in Chinese and Japanese.
Not only Blacksad. The exhibition in Friuli goes beyond the well-known anthropomorphic cat and presents an extraordinary preview. After the success of The Little Witches (Dargaud), the album Les Indes Fourbes, and the special What’s News, distributed by Europe Comics for the twentieth birthday of Blacksad, the author returns to Italy with a real treat.
The international preview of fanzines belonging to They all fall down and, 130 unpublished panels and original illustrations, will make this exhibition the largest ever held in Italy. The high value of the originals is another point of pride for the artist: the works are estimated to be worth tens of thousands of euros, some reaching a hundred thousand.
From the initial compositions to the final panels, the exhibition will allow visitors to discover the fascinating world of this great contemporary author.
Previous publication Biennale Arte 2022: With Hands Signs Grow Next publication PINTA PArC 2022 in Peru