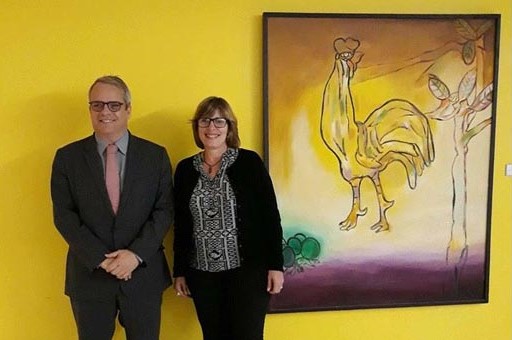 The president of the National Council of Cultural Heritage of Cuba, Gladys Collazo, met at the headquarters of the United Nations Educational, Scientific and Cultural Organization (UNESCO) with the secretary of the Convention for the Safeguarding of the Intangible Cultural Heritage, Tim Curtis, diplomatic sources said today.

According to a press release, at the meeting, Collazo explained Cuba's priorities and interests in terms of safeguarding the country's intangible heritage.

In that regard, she referred to several actions taken by the Council in conjunction with other related institutions and communities to defend the towns' customs, traditions and legacy from generations that remain alive.

For his part, Curtis acknowledged Cuba's work and leadership in implementing the Convention for the Safeguarding of the Intangible Heritage, as well as its active participation as a member of the Committee.

The communiqué added that several issues attracted the two delegations' interests, including the value of community in the process of identification and safeguard of that heritage, as well as the need to increase the awareness on the representative list, which shows the world's cultural diversity.

Collazo expressed gratitude for the support and collaboration from the UNESCO Secretariat in the implementation of a project to identify, define and inventory the intangible heritage in eastern Guantanamo province that will allow learning and protecting the most representative cultural expressions in that region.

The Cuban official is participating in the 7th General Assembly of the Convention for the Safeguarding of the Intangible Heritage, which opened today with participation of all 117 State parties that will debate key issues for the future of that instrument.