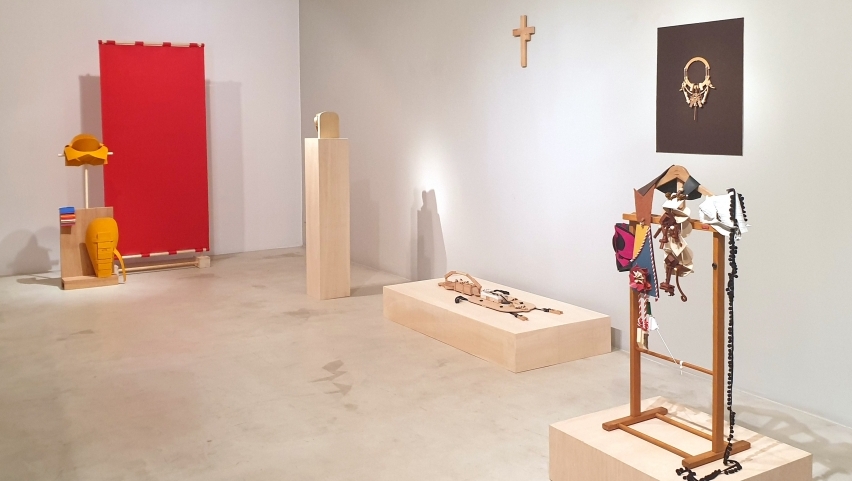 Emblems and Ornaments, an exhibition by José Miguel Pereñíguez

To inaugurate the artistic season and the Apertura Madrid gallery weekend,
Michel Soskine Inc. is extremely pleased to present Emblems and Ornaments, an exhibition by José Miguel Pereñíguez (b. Sevilla 1977), the first with the gallery. The exhibition does not pretend to only center itself on the artist ´s most recent works, but rather intends to show the diversity of its various languages and states that form its oeuvre. Within that spirit, Michel Soskine Inc. has counted on the special collaboration of the artist Guillermo Paneque, who, together with Pereñíguez, have mounted this exhibition aiming to show visitors various aspects and moments of his artistic trajectory.

Amongst all the works exhibited, the earliest ones tell us an extremely personal history of culture, roughly reconstructed in the intimacy of the studio through small sculptures and maquettes. A drawing then almost always followed with the intention to draw up minutes of these relics and vestiges, resulting in an uncertain belief of its origins, its authenticity, or the very proper nature of its representation.

At times, the proper studio lends itself as a theme. From discarded remains and parts, the artist plays with establishing an illusory order that follows suit the appearance of these Renaissance allegories used to represent the knowledge of the period as a melancholic gathering of artifacts.

This fascination for the object marks and extends itself to the artist´s sculptural production as it unfolds in a series of elements already built on a human scale: simple machines, furniture or working tools are embellished as if to be used in a ceremonial act. These works, made out of wood and skin are elaborated with extreme rigor and offer themselves to the viewer as examples of an impossible design, looking inwards and spelling irony over its function, form and making.

At times, the destiny of these objects goes further than the mere exhibition space. Some of the works exhibited here have been created for the stage and used in various collaborations with the Sevillan dancer Andrés Marin and in particular in La Vigila Perfecta presented in the Monasterio de Santa Maria de las Cuevas which took place during the 2020 Seville Flamenco festival. Coinciding with the current exhibition in Madrid, we will be able to see between October 13 and 17 the fruits of Pereñíguez second scenic collaboration with Andrés Martin in its new Ectasis/Ravel (Show Andaluz) performance at Teatros Canal de Madrid.

Increasingly and every time more conclusive in its shape, Pereñíguez´s objects refer to the body that manages or wears them. Or, like the title of the exhibition suggests, these "ornaments ", past their ornamental function, pretend to involve an eventual bearer into the development of a ritual still to be discovered. Or, with the involvement of both body and object to imprint in our mind a new image, so enigmatic in its reading and similar to those hieroglyphs or emblems that are kept hidden in the artist´s drawings.

Finally, beyond the diversity of how much is being exhibited here, one can apprehend the artist´s common trail in his undertaking of building and representing: to bring into the open how forms and shapes can prepare ourselves to go out in search of an encounter with reality by means of a thousand set ups, devices, forms and strategies.