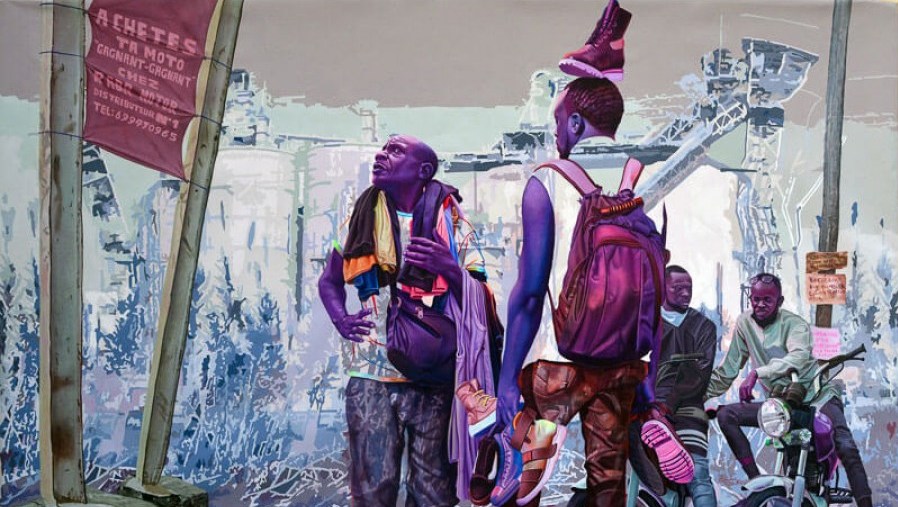 ABDIAS NGATEU
The roads of the impossible by Sylvain Sankale

Fabulists of all times and places, have used animals to convey their message, especially when this message is intended to be critical of the world as they see it around them. They live in it and wish they could change it. Using this same medium with humor, amplified by the humor of the situations he stages, Abdias Ngateu tells us through his paintings of the difficulties of his country, Cameroon. But his critical eye for observation is certainly valid from one end of our continent to the other.

Beyond the animals that look so much like humans - unless it is the other way around - the artist has chosen the nagging question of urban travel to carry his allegory. The roads, barely devoted to traffic, are immediately shattered by the disorder and the lack of respect for accepted standards of use, but especially because of the deficiencies of the builders that allow various forms of corruption to involve the use of all kinds of means of transport.

The ingenuous and jaded eye sees this colorful folklore so "typical" of Africa, these improbable and overloaded vehicles, but which still run with kicks and wires. The user is forced to utilize this mode of transportation on a daily basis to make their necessary trips, transport their goods or luggage, face the vagaries and congestion of traffic to clock in on time at their factory or administrative job. This is not a reflection of their poor social and material conditions or the failure of development policies which characterize our countries. The smile freezes at the corner of our lips because if the projected image is funny, the reality that it sublimates is also heavy and laden with threats to our daily lives. The artist plays on this contradiction with exceptional virtuosity and reading his work requires at least two levels of understanding, the immediate and noticeable smile and, behind it, the much more cringe-worthy comedy of unbearable situations.

One will not be surprised to learn that Abdias Ngateu, alongside his training in graphic and decorative arts which began at the age of 14, also studied sociology at the University of Douala, Cameroon. His colorful works are undeniably funny, but they are a distant witness of Cameroonian sociology and could be from any of our countries.

Satire sneaks into the brands and distinctive signs of the transported merchandise, inscriptions painted in contrasting colors on the patchwork bodies of the vehicles: "free wifi on board", "air-conditioned taxi" or more pathetic, "The life of the black man”. The interpretation of the physiognomy of animals, the species of fatalism, of constrained passivity when they are not smiling, we see in all “faces" and which masks the exhaustion, both of bodies and of souls. No detail escapes us and each one lights a sign, which should alert our attention and take us out of our comfort zone.

No one will be surprised to learn that the artist, in his early thirties, has already benefited from various forms of recognition for his talent, either in Cameroon itself, where he won the 2015 “Discovery” Award from the Goethe Institute of Douala, or abroad since he was selected to represent his country at Segou'Art 2016 in Mali. Ngateu was awarded the third prize "Pascale Marthine Tayou" in the national contest "Young Hopes 2017", organized by the Doual'Art space. He also participated in the OFF of Dak'Art 2018, the prestigious Biennial of Contemporary African Art in Senegal. And in 2020, his work "Taxi Brousse" reached more than respectable bids at the ArtCurial auction. A great career opens before him with the support of the OOA Gallery, which has represented him since 2018, and with great prospects on all continents.

And let's hope you keep in mind the motto written on one of his famous taxis:
"YOU SLEEP, YOUR LIFE SLEEPS!”

DANIEL ONGUENE
Adventure between the Ruins by Sylvain Sankalé

The period of independence, some sixty years ago, saw the creation of the first fine arts schools on the continent, the first individual and group exhibitions, festivals and other events. The euphoria of this freedom, at times hard-fought, the nationalist movements, the return to roots and origins, all this enthusiastic speech was transferred into the works that we admire from Dakar to Yaoundé via Brazzaville! Africa was beautiful, it could finally mix its voice with the concert of nations, its identity became a source of pride and everything had to reflect this faith in a better tomorrow that would inevitably sing.

A generation later, many cries of joy have died down, disputes have arisen, African unity has been shattered and the march towards development raises questions in all segments of the population. The rural exodus causes its multiple ravages, which are multiplied tenfold by a general atmosphere of laxity and fatalism. The countryside hit by all manner of human and natural calamities is being emptied in favor of cities which were not designed to absorb such large population growth.

Problems arise at all levels of life for the city dwellers. Accelerated urbanization no longer obeys the slightest standard. The networks, whether electrical or sanitation, are suffocating under the weight of anarchy and lack of maintenance. Finally, the few industries that have been able to exist, of poor size, true "white elephants" as the artist calls them, collapsed. Plagued by "structural adjustments", liberalization policies have been rolled out at all costs. For example, the opening of borders to productions from all over the world, China in particular, is alluded to in some of the artist’s work, the domestic sectors that tried to survive no matter what.

In is this Africa of today, and this very disenchanted youth of Africa, that Daniel Onguene seeks to represent, like many artists of his generation, who at just twenty-six years of age, made their sensational entrance into the artistic creation of our continent.

It is true that he has a master's degree in visual arts and art history, with a focus on painting, obtained just two years ago at the Institute of Fine Arts of the University of Douala; he shows a surprising mastery of his technique. He was distinguished and awarded at the age of twenty by the Jack Bell Gallery in London, who scrutinizes the most promising talents of contemporary African art, thanks to a competition open to art schools on the African continent. He continued his journey, exhibiting several times in the best galleries in Cameroon, including the MAM Gallery in 2017 under the curatorship of Simon NJAMI. The present exhibition at the OOA Gallery is the first real exhibition of Onguene’s work on the European continent.

The "Adventure Between the Ruins" project, which he presents to us here, questions, in his own words "the causes of the emergence of the informal sector in Africa". Illustrated on the gray backgrounds of a chaotic world, almost already buried in the past, the daily life of these anonymous “heroes”, painted with precision in a very figurative way, who strive to survive however they can, through the practice of an exhausting multitude of "odd jobs”. One wonders how they manage to feed themselves and even their families.

There is a great deal of empathy in Onguene’s work, which shows in the affection and respect he demonstrates in his characters who remain dignified when they are not dynamic and combative, in bright and spicy colors, despite the harshness of the times. He even manages to convey a bit of symbolic hope, as in the particularly illustrative work entitled "The Life After the Fall". It features a former industrial worker who appears among ruins in the background and who seems to bear all the misery of the world on his shoulders. His four wives are lined up along a wall behind him, but all of them are pregnant and therefore bearers of life and hope. Past, present and future brought together in one and the same allegory which is also a good representation of the message of the artist whose career is to be followed with interest.