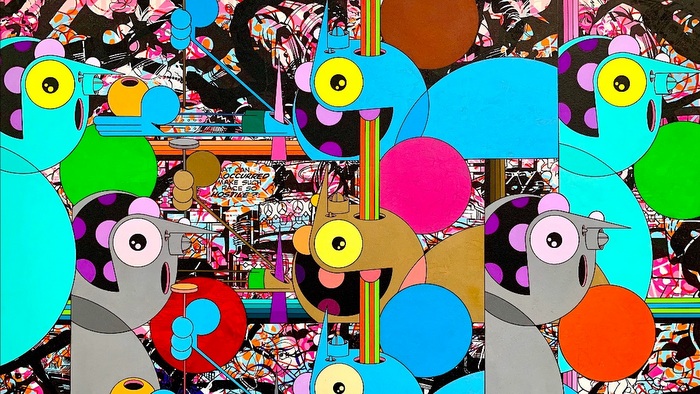 "SURFACE FETISH" aims to exhibit the unique artistic wit of these two internationally known legends, that have brought to the next level the idea of merging Pop art, animation and Japanese culture with urban art, inventing the now super-iconic characters of "Space Monkey" and "The Melty Misfits". Marshall's alter ego, the "Space Monkey", is a character through which he expresses his emotions and ideas, interpreting his concept of a human being lost in a growing sea of technology and convenience. While Buff Monster's "Melty Misfits" deliver his vision of the world through captivating, happy characters living in bubbly landscapes, masking a subtle darker truth underneath.

Buff Monster is a New York City street artist who uses bright colors, bold lines and funny characters to make the world a better place. He names heavy metal music, ice cream, pop art, Japanese culture and graffiti as major influences. For over 15 years, he's painted murals and exhibited in art galleries and museums all over the world, and is included in Banksy's Oscar-nominated documentary Exit Through the Gift Shop. He's worked with some of the most recognizable brands such as Disney, Converse, Hello Kitty, Samsung, Nike and Coca- Cola.

James Marshall aka Dalek merging animation, Japanese pop art, and an urban aesthetic, is best known for his Space Monkey character -which became Dalek's alter ego, a medium through which he expressed his emotions, ideas and concerns- until 2007, when he began working in a purely abstract style. Marshall has always been engaged in skateboard and graffiti subcultures and cites his assistantship in the studio of artist Takashi Murakami as a major influence. He has participated in numerous shows throughout the world and has worked for companies including Nike, Hurley, American Express, Microsoft, and Instagram.

"Surface Fetish" puts together 30 pieces, including paintings, works on paper, site-specific installations, appositely conceived for this exhibition. On the opening day , will be released a new collaborative print, executed and signed by both artists. The print will be available at the gallery the night of the opening and on-line the day after at 12:00 pm EST.