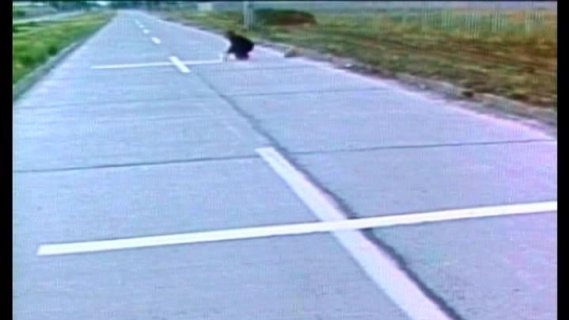 Luciana Brito Galeria introduces the LB/Online Video Festival, which features a set of current and historical videos that provide an overview of the history of video art in Brazil and around the world. Besides being a flexible medium, accessible from wherever we are, at any time, video is perhaps the medium which has most assimilated the transformations of contemporaneity, gaining definitive standing among the visual arts.

"Una Milla de Cruces Sobre el Pavimento" (1979) by Lotty Rosenfeld is a first "art action" on the dividing lines between traffic lanes attempted to challenge the established mandates and invited passers-by to critically reshape the experience by which they are held captive to everyday order.

Each week, a new video will be made available and will remain on our site for an indefinite period. The idea is to challenge the spectator's gaze to question the contents of the video and to debate its proposals, in an unassuming exercise to understand the works of these artists, as well as their positioning within the history of video art.

This new project being carried out by the gallery was conceived by Analivia Cordeiro, who also participated in the curatorship together with the gallery's team.

The public may moreover access the main section of the gallery's site, which has been updated with new artworks by the artists we represent.