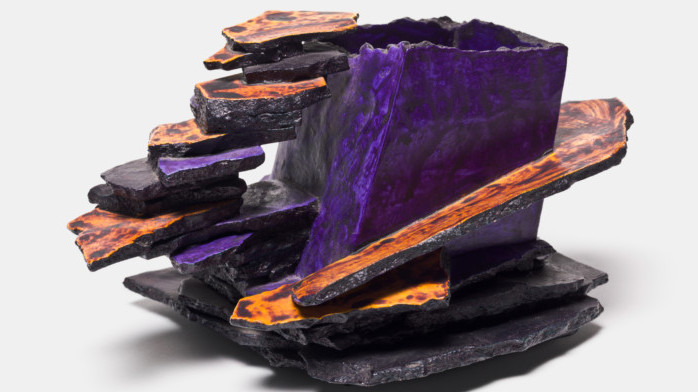 Suellen Rocca: In Dreams, The Last Works spans the last two decades of the influential Chicago painter's life from 2000 until her untimely death in 2020, and highlights her sustained interest in dreams and the subconscious from 1981 onwards.

The recurring fish and torso motifs originated from her studies of Max Beckmann, and Rocca had said the two signify a sense of "not being able to hold onto things." Her final works from 2020 merge such introspective symbolism with the hieroglyphic syntax of her earlier Hairy Who days. Rocca's signature "picture writing" style of "arranging pictograms of often gendered imagery such as jewelry, handbags, and female body parts," was, as Artforum's obituary noted, one that Rocca developed while raising two young children in the 1960s.

Rocca's final paintings and drawings debuted at the Vienna Secession last year, and make their anticipated U.S. debut this evening at Matthew Marks.

Ken Price: Pluto Ware features 25 ceramics and 8 works on paper from his rarely seen series from 1993 through 2000, which is occasionally misspelled as "polluto."

The Pluto Wares depict smoke-spewing factories and leaking oil refineries, often along disquieting grey bodies of water, all abundant in the artist's native Los Angeles. These scenes are painted on plates, mugs, and other objects of domestic subtext, created following Price's studies of Mexican ceramic traditions.

A longtime friend of architect Frank O. Gehry, Price's keen focus on natural and manmade landscapes is palpable in Pluto Ware, which uncovers an atypically unabstract side to his recurring influences of nature, folk tradition, and West Coast vernacular.

Previous publication Discover emerging voices from across the globe Next publication AKAA: 6 galleries exclusively on the new digital platform!