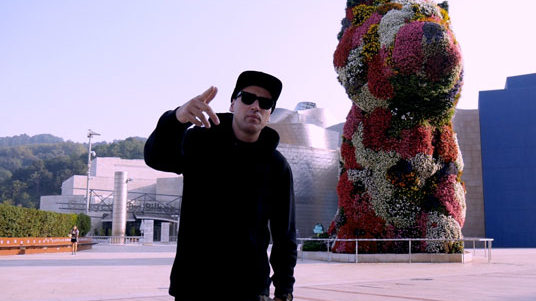 The Guggenheim Museum Bilbao has just presented P.U.P.P.Y., a rap composed and performed by Bilbao-born MC Gransan in the context of the crowdfunding campaign launched for the restoration of Jeff Koons's iconic sculpture. Recorded around the Museum, the rap 'gives voice' to Puppy through Gransan's perspective and music style—with numerous references and nods to the rap world—and encourages people to contribute to the campaign.

Gransan is a seasoned Bilbao-born MC and one of the most prolific MCs of the Basque scene. With twenty-plus years' experience writing lyrics, he combines rap making, beatmaking, and audiovisual production. He is the author of "La capital del mundo" about the city of Bilbao, and of the official song of the "Men in Black" of the Bilbao Basket team.

Previous publication Camille Pissarro. The Studio of Modernism Next publication A 'son' for the 'Caballero' of Cuban music