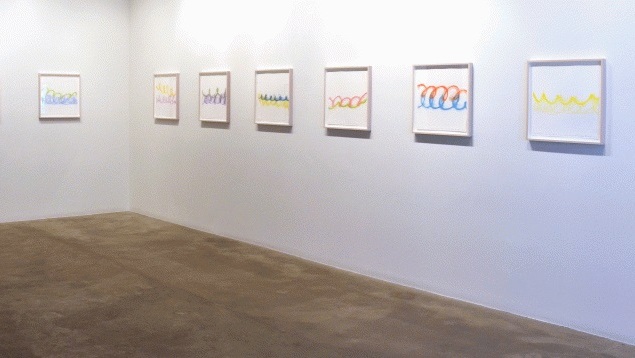 looking around, gazing intently, beholding—​ Spencer Finch's sixth solo exhibition at Rhona Hoffman Gallery—borrows its title from a haiku by Matsuo Bashō (1644–1694), a celebrity poet of Japan's Edo Period. The new works in watercolor, pastel, and fluorescent light result from Finch's continued explorations of color, perception, and natural phenomena, embracing science and poetry in equal measure. The work communicates experiences of the world that are both universal and intimately subjective.

The exhibition centers four sculptures of filtered fluorescent light whose three-part structure, vertical orientation, and 17 color segments mimic the traditional Japanese haiku form. ​Haiku (Spring) is based on a light reading made by the artist at Kenrokuen Garden in Kanazawa, Japan; the first line is based on color observations of azaleas, while the second and third are derived from cherry blossoms and irises. Haiku (Summer)​ is based on the quality of light during a thunderstorm; ​Haiku (Fall) ​represents moonlight reflected on a pond; and ​Haiku (Winter) ​is inspired by the colors of a shadow on snow.

The works on paper visualize similarly poetic systems Finch has invented for observing the world around him. To create the large-scale ​Following a Bee (Zinnias)​ pastel drawings, Finch planted a patch of zinnias in his garden, then observed from above as bees pollinated the flowers. Each drawing maps the flight of an individual bee and the flowers of various colors on which it landed. The ​Gutter ​watercolors, meanwhile, are based on collections of objects observed by the artist in street gutters on his walks through different cities. Painted wet on wet stretched paper, each composition's seven colors coalesce into a form reminiscent of a rainbow. Finally, ​Color Notes (Summer) ​is a suite of 25 small abstract studies of color and form, which Finch describes as "haiku-like observations of the world," organized by season. The ongoing project draws inspiration from Emily Noyes Vanderpoel's pioneering study of color theory, Color Problems: A Practical Manual for the Lay Student of Color​ , originally published in 1901.

In this moment of collective urgency and uncertainty, Finch encourages us to take a moment to find beauty and meaning in our everyday surroundings; to look around, gaze intently, and behold.

Spencer Finch (b. Connecticut, 1962) lives and works in Brooklyn, NY. He studied at the Rhode Island School of Design, Hamilton College, and Doshisha University in Kyoto, Japan. Finch has exhibited internationally since the early 1990s. He has completed recent projects at the Seattle Art Museum Olympic Park, WA, MASS MOCA, MA, and an outdoor installation, Lost Man Creek, organized by Public Art Fund in downtown Brooklyn. His solo museum exhibitions include A Certain Slant of Light at The Morgan Library in New York City in 2014, The Skies can't keep their secret at the Turner Contemporary Museum in Margate, UK in 2014, Following Nature at the Indianapolis Museum of Art in 2013, Painting Air at the Rhode Island School of Design Museum of Art in 2012, Lunar at the Art Institute Chicago in 2012, My Business, with the Cloud at the Corcoran Gallery of Art in Washington, DC in 2010, and What Time Is It On The Sun? at MASS MoCA in 2007. Finch was included in the 2009 Venice Biennale exhibition, Making Worlds, and the 2004 Whitney Biennial.

His public projects include The River that Flows Both Ways for The High Line in New York City (2009), the glass facade design for the Johns Hopkins Medical Center in Baltimore (2012), Vital Signs for Quadrant 3 in London (2013), and Trying to remember the color of the sky on that September morning for the 9/11 Memorial Museum in New York City (2014).