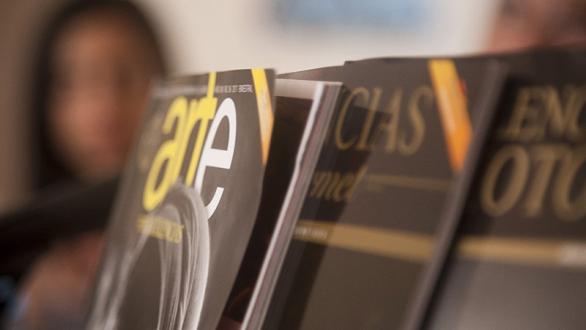 Nine years of Art by Excelencias

Arte por Excelencias celebrates nine years with its 37th issue, and has just left the printing office to visit the ARCOmadrid and Art Madrid exhibition halls in Spain, and to continue accompanying the great event of contemporary art in Ibero-America. Our special envoys, Yordanis Ricardo Pupo from Granada, and Ramón Casalé, from Barcelona, ​​have a lot to say, and not only about the controversy and censorship of the work of Santiago Sierra. We invite you to read them at www.arteporexcelencias.com.

The January-February magazine welcomes the 20th Anniversary of the Habanos Festival and the Grupo Excelencias, with the work "La familia," by the multifaceted artist Nelson Domínguez on the cover, and includes Dossier de arte and interview with the one who has just inaugurated the first gallery of rural art, and celebrated his new wedding, in the mountains of Escambray, at the center of the Big Island of the Antilles.

Similarly, issue 37 brings an exclusive from Quisqueya, the story by Thimo Pimentel, Premio Nacional de Artes Plásticas (National Award of Plastic Arts) on artist Fermín Ceballos, one of the most remarkable exponents of contemporaneity in plastic arts; and the critique on the performances in Havana of the play "Defilló" by Cuban choreographer Marianela Boan with Compañía de Danza from the Dominican Republic.

Arte por Excelencias dedicates its first pages to the Week of Art in Miami and to the fairs around Art Basel Miami, as we arrive once again with a stand at Zona Maco, Mexico City, thanks to the persistence of our special envoys Toni Piñera and Jorge Fernández Era. The latter managed to “capture” collector Gary Nader on his way to his own stand, and here are his always controversial statements in "Gary Nader: a premium interview."

There is another real gem in our pages: the interview with Carilda Oliver Labra at her home on Calzada de Tirry, made by José Carlos de Santiago, president of Grupo Excelencias, as he passed by the”city of the bridges,” and where the famous poet from Matanzas confesses that she has defeated the world.

In this issue you can also find out why the great Micheangelo Pistoletto keeps a castle in Havana, and Ramón Casalé´s opinions about the recent exhibitions of the museums in Bilbao; while our gaze reaches the last sample of gypsy art at the “Federico García Lorca” center in Granada, and the works that Collage Habana Gallery took to the Palacio de Cristal.

Also on the central pages, there is art criticism with Manuel López Oliva, who reflects on why it is necessary to say "Artists, and not Artists"; while the lens of the Eye of the Condor, by Kaloian Santos, roams the streets of Madrid in its Art Week for the second time. We go from Naples, and the fields of Cuba, to the twelfth session of UNESCO that registered the art of Pizzaiuolo and the Punto Cubano on the List of Intangible Cultural Heritage of Humanity, to Puyo, in the jungle of Ecuador, or to the halls of the El Museo de La Cera (The Wax Museum) in the city of Bayamo.

And since this is a Multicultural Publication of Latin America and the Caribbean, here you can read about the intense days of the 33rd Jazz Plaza Festival, invaded by famous musicians from the United States and Puerto Rico; and the exclusive statements of Joe Lovano, the “Godfather of Jazz,” at the luncheon that Excelencias gave him at the Atelier restaurant, on a Havana afternoon, after the rehearsals at the Teatro Nacional de Cuba.

Likewise, you will be able to learn about the enthusiasm for the recently rescued Festival Popular de Música “Benny Moré” in the city of Cienfuegos, and about the dreams for the centenary of the Barbaro del Ritmo; and about the next Fiesta del Tambor (The Drum Fest,) which already invites to the Cuban capital, thanks to the perseverance of Giraldo Piloto, who raises our sacred batás drums to another dimension.

But you should better find it in www.revistasexcelencias.com, where you can even browse issue 37. And in www.arteporexcelencias.com, whose digital bulletin grows in demand day by day among gallerists and cultural promoters. We await your opinions by mail, either to our Arte por Excelencias page on Facebook, or by the email of our editors: arteexcelencias@gmail.com, and editor.arte@excelencias.com

It is Art, plus the multiplying force of our cultures in the Americas and the Caribbean. Our huge, fraternal and simultaneous hug from Havana and Madrid.