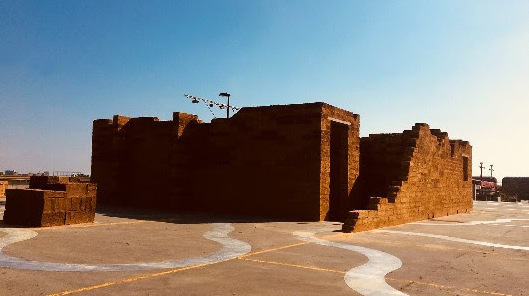 ‘Home 2.0’ (2018) is an installation by João Vasco Paiva stretching across the rooftop of Bold Tendencies, a converted car park in Peckham, London overlooking the urban skyline, its varying states of historicity and construction populating the distance. Selected as one of the organisation’s 2018 art commissions focusing on ecology, ‘Home 2.0’ is a meditation on mankind and the trappings of our evolutionary paradigm. From the exterior, it resembles a derelict one storey abode typical of the south of Europe, its skeletal outlines jutting at varying levels, creating a structure that is both architecture and landscape. Weaving inside and viewed from above one remarks that the interior references a maze, ‘Home 2.0’ existing as the fruit of organic design, as the first inhabited areas were before urban planning. Composed of cob block and organic material, the structure borrows the vernacular of practices common in different geographies, from the United Kingdom, to Central America, North Africa and East Asia, whilst slight revelations of reused plastic debris point to humanity’s own hand in the creation and evolution of matter.

Adapting the lexicon of archaic agglomerations of houses, old villages or parts of towns sharing natural spatial distributions, ‘Home 2.0’ points to how we have not evolved much, physically, in the last 200,000 years. Whether perceived as a ruin or an unfinished construction, or a ruin of an unfinished construction, Paiva nods to humanity’s repeated efforts for domestic space, to create a home, shelter, but equally how its existence or ruin makes the cityscape, whether a place in economic prosperity, financial crisis or struck by war. Via this oscillating constant, the installation creates ground to identify how we have developed, primarily, intellectually: how we think, what we’ve created, discovered, how we extend our own evolution but equally carry responsibility for our impact. ‘Home 2.0’ points to a primordial past, to a violent present, and to a not so unimaginable future - to both the ephemerality and permanence of form.

In approaching the structure it further reveals itself, the brushed surfaces giving way to slithers of straw, pebbles, rock. In parts there are shards of plastic, a nod to our own creations and subsequent waste, but equally how it can be regenerated, reused. Casting different shadows throughout the day depending on the position of the sun, the structure shifts in zones of warmth, tonality, adapting to its environment, taking on a presence and personality of its own; sound is slightly muffled, channelled by the walls and passages. ‘Home 2.0’ in its height and physical properties surrounds the viewer in a manner that is at once protecting, intriguing and isolating from external stimuli - a cocooned encounter. Moving through there is a sense of suspension, a sensed meeting with our future archeology, as if one is uncovering or indeed discovering an edifice of the past that references in its intrinsic granular properties the current traces we will leave.

‘Home 2.0’ is at once a comment on the universality of building shelter as well as a reminder on the inevitability of destruction and decay. It is about the act of ‘making’: how man and earth come together to construct, but equally how man-made elements are part of our creations and indicators of our labour. Crucially, through its limited physical existence, it acknowledges cyclicality, a matter of coming and going, both in terms of topographic existence but also human existence, whilst hinting to the importance of ‘sense’, a property that outlives the structure itself - an impermanent permanence.

João Vasco Paiva (b.1979, Coimbra, Portugal) is a Hong Kong and Lisbon-based artist who observes the complex and continuously shifting characteristics of objects and spaces. Interested in semantics – the visual language each structure, perimeter and component may possess – Paiva examines the particular lexicon of constructed, detruded or neglected units, systematically documenting, analysing and abstracting them to compose a process-driven composition that is simultaneously an artwork. At the heart of Paiva’s practice is an interest in deciphering the constructed sum of human activities, and using modes of production and fabrication to peel the intricate layers that comprise the structures of contemporary life.