Since Oct. 7 through Nov. 10, Madrid will be hosting a photographic exhibit entitled Copan: Mayan Witness, organized by the Palma de Majorca-based Sophia Foundation with the collaboration of the Madrid City Hall, the Honduran embassy and the Guaymuras Association.

The Mejia Lequericas Center is the space of choice for this exposition that’s part of a series of events related to the Second Decade of the World’s Indigenous Peoples. Copan, World Cultural Heritage since 1980, was one of the most important State cities of the Mayan civilization. It’s located west of the Honduran territory and was home to a dynasty of 16 kings that ruled during the Mayan classic period. It’s famous for the elegance of its buildings, shrines and constructions –originally decorated with eye-catching polychromatic reliefs- and its astounding stone steles. 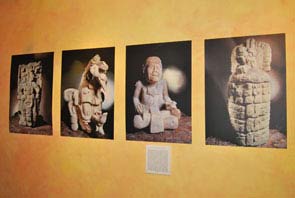 All this much has been captured in images by Honduran photographers Arturo Sosa, Juan Bendeck and American Vicente Murphy.

Spectators will have the opportunity to take a closer look at the sculpture of King Uaxaklahun Uba K’auil (695-738 A.D.), the main advocate of the so-called New World Athens. In the same breath, they could watch shots of a ball field where the millennial cosmic ritual was held, symbolizing the movement of the stars and the struggle between good and evil.