Art by Excelencias: a window to the world 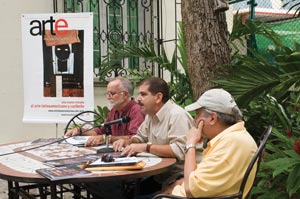 On the afternoon of Nov. 16, 2010, the Servando Museum in the Cuban capital was the place of choice for the presentation of the Art by Excelencias magazine’s two latest issues (6 and 7).

The keynote presentation was made by Dr. Yolanda Wood, a contributing writer and member of the editorial council, who went directly into the contents of these two issues from quite a different perspective. “Abstraction,” she said, “is a pathway of discoveries as methods of observation and understanding of reality, a dramatic change in both the ways of seeing and doing that bear out new and different roads for artistic creation.” On the one hand, a genre vision that lays bare –as in issue six– the role played by women in the realm of arts. Good cases in point are Soucy de Pellerano in a text penned by Marilyn Sampera on contemporary sculptures in the Dominican Republic, represented by Monica Ferreras, Belkis Ramirez and Raquel Paiewonsky. On the other hand, Dr. Wood made reference to the timely inclusion of essays and interviews related to collections and the art market, as well as the need to insist in those topics in coming issues. 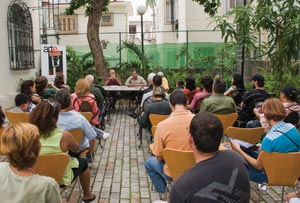 Other boldface guests who attended the presentation were Norberto Codina, publisher of Gaceta de Cuba –a magazine dealing with art and literature put out by Cuba’s League of Writers and Artists– and Nelson Herrera Ysla, a Cuban art critic and curator were invited. Dr. Yolanda Wood also attended. Codina referred –among other topics– to the role a publication on visual arts with these characteristics actually plays in the Cuban context –where it is published– and the way the magazine melts into that context marked by La Gaceta de Cuba, Artecubano, ArteSur,Revolucion y Cultura, among others. He also stressed on the intense projection toward Hispanic America and the rest of the world. He recalled that two years ago the magazine project was already underway and he praised the Excelencias Group’s commitment to it as the Spain-based company left behind the uncertainties any new publishing project could trigger from both the cultural and economic perspectives.

Nelson Herrera, for his part, addressed the vital role played by the editor and the designer of any visual art magazine. He praised the job done by David Mateo at the helm of the editorial team for having pieced together seven issues with a delicate thematic balance. For Herrera, the magazine offers one-and-only possibilities to take a closer look at certain topics such as the publication of art books and catalogs in the region –usually far from the reach of a considerable chunk of readers.

In the same breath, he extolled the job conducted by assistant editor Charo Guerra and designer Jorge Rodriguez (R10) in the project’s visual conception.

Previous publication NKAME: A Black and White Album for Belkis Ayon Next publication Museums without borders