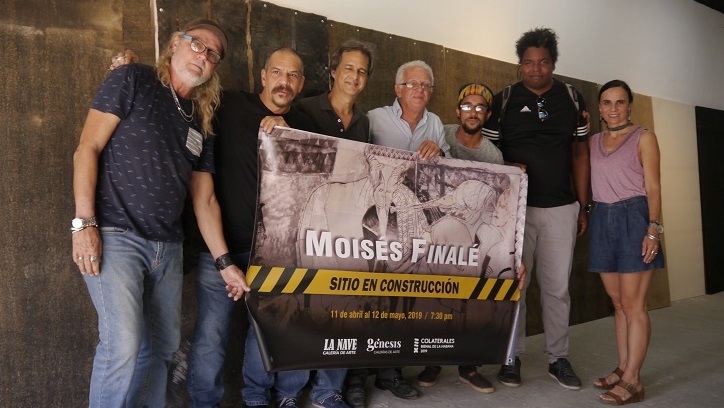 It rains on the dry

On the suspicion that "more attention and visibility should have been given to the artistic proposal of Moisés Finalé at the XIII Havana Biennial", and after a few weeks after the culmination of the mega event of contemporary art in the Cuban capital, I think it is time for honor who deserves honor. And, with that, I don't want to say that these lines will become a dry apology with threshed words or groped garbage, the one that appears on the internet.

To be honest, I had the opportunity to be face to face with the work of Finalé a few years ago, when he presented Levitation in the Origins gallery of the Great Theater of Havana Alicia Alonso. Perhaps on that occasion I was not prepared to receive the artist's ball. Rather it was a hidden ball, I was afraid of not finding it. Four years passed from that event, so I came once again to the raw and hard encounter with Moisés.

The artist of the eighties generation presented his project Site under construction in the Gallery La Nave of Genesis Art Galleries, and somehow had to collaborate in the promotion of the initiative. During the month of the Biennial Moisés would work ten large-format panels in collaboration with guest artists. The staff was formed as a reason for his journey through different provinces, including Cienfuegos, Matanzas and Santiago de Cuba, where he met again with friends and met young creators as his countryman Victor Manuel Maden Morgan. Thus the scene between established artists with whom Moisés was interested in working was raised: Alberto Lescay, Nelson Villalobos, Lucía Zalbidea, Rubén Rodríguez, Eduardo Rubén García and the scientist Rafael Cáceres. The young Víctor Manuel, Alejandro Lescay and students of the San Alejandro Academy (Frank Piña, Nurys Leydis Delgado ...) completed the staff. The goal was for the public to appreciate the process of creating the works. In this way the creative swarm would conspire to make the viewer's experience more sensory about the conception of a work of art and provide an opportunity to appreciate collective work.

The dish was served and on the table were the dressings, And what dressings! The project featured weekly presentations in which the team's work was exhibited, accompanied by the excellent music of the troubadours Tony Avila and Roly Berrio. Pablo Villalobos was responsible for preparing a documentary about the experience.

From saying to fact

Moisés Finalé proposed to his invited artists to move towards the space of La Nave, located on 18th Street between 5th. and 7th., Miaramar, and turn it into a creative workshop that would allow them to interact with their work. The moment of action arrived and the Site under construction was officially inaugurated. It was impressive to see so many artists gathered that I only knew through photographs. There began my personal dialogue with the work of Finalé. I had not related much to him yet, but I approached him and asked him for a few minutes to talk about the project, since I had to speak at a press conference about the site that was being built. To my amazement, he gently agreed. Of course I took the opportunity to ask the odd question about the suspicions that began to generate his work. We talked a few minutes about various topics and about his vision of the Havana Biennial as a necessary space to make young talent visible. Wasn't that the reason for being since its inception, back in 1984?

As the days went by I was able to interact with the other artists, learn about their concerns. Like me, the public that came to the creative space could do the same. It is a great privilege to see them in full creative process, to have them at hand, as happened to the young creator Luis Enrique Milan, winner of the fourth edition of Post-it, who did not hide his satisfaction when he met one of his references, Alberto Lescay . Milan was also able to show the group its ideas and works, and received occasional advice from those who have established themselves in the Cuba team of art.

Moisés is a simple person whom fame has not been able to seduce. He tells me jokingly: "I have clear ideas; I am not interested in conventional painting." That was what he transmitted to his guests, some of whom barely exceeded 18, and were surprised to see how the project was an invitation to transgress the demonstration, to release the ties of the most conservative and academics painting.

I remember the experiences lived during a whole month and the balance is unsurpassed. Moisés Finalé's project was exceptional for the XIII Havana Biennial. First, we have the fact of its conversion into an interactive space, which privileged the public's connection with artists and works. Art needs to communicate, must leave the pedestal and walk to the knowledgeable public or not. Second, the project served as a training space for young guest creators. How many times do young art students have the opportunity to work with artists such as Nelson Villalobos, Alberto Lescay or Finalé himself?

On the other hand, Finalé propitiated the presence and visibility in the Havana Biennial of provincial artists, often lacking opportunities, as was the case of the scientist Rafael Cáceres and Víctor Manuel Maden Morgan. It is then necessary to talk about the human quality of the artist, who welcomed his guests into his own house so that they could work in the capital. How much satisfaction to help the youngest in the beginning by the difficult path of art. Actions like these are not given every day. The greatest wealth remained in the work group, in that deep friendship that was forged in just one month.

From stick to rumba

As I look closely at the gigantic finished panel, I realize that in this case the practice and the fact went well beyond the saying. It left the conventional framework of the artist's workshop and became the sacred place of the gallery in a creative space, generating ideas and feelings. Approaches to Finalé's work are loaded with his spirit, his hand is appreciable. Moisés is a tireless worker, he takes advantage of any extra-artistic means that gives him an expressive opportunity. Watch over his work and not for a second it should seem to us that there is neglect or unfinished in his practice, because it is not so. Every detail is thought meticulously. It incorporates as much material as is convenient: jute, iron, wood, soft cooked forms, ceiling paper, but always worked and harmonized according to its figuration.

Finalé's work is an amalgam of intuition and apprehended experiences. Of course he studied Wifredo Lam's work at the time, but he went further. Like the teacher, he had to feel and experience the original African sculptures. The opportunities were in France in the late eighties, there his work had greater understanding and acceptance. No one is a prophet in his own land and his case was no exception.

His plastic universe is immersed in the mysticism and charm of what Alejo Carpentier defined as real and wonderful in the prologue of his novel The Kingdom of this World. That literary category that constitutes a guide to rediscover the charms of the American being translates into the fantasies of the artist. Uncovered are those fantastic beings and the power of nature as a creative source.

Regardless of the latitude in which it develops, its production appeals to the Cuban identity, it is authentic, of deep appropriation of the cultural roots of our ajiaco, in the words of Fernando Ortiz. Mixed blood runs through his veins and this is appreciable in his work. The profusion of elements in their compositions with masked figures, the exuberance of their representations in tune with the beauty of female or male bodies — it doesn't matter — is the reflection of Cuban DNA. If we look at Havana at almost 500 years old, we will find the tune of Finalé. There is no lack of architectural baroque and cultural and religious practices of Afro-Cuban origin. There is a popular phrase that says: "The Cuban, when they don’t reach it, they exceed it." We well know that it is a city of excesses and full enjoyment. It is also the city that enchants music, mysticism, history, excitement and decadent glamor. All this lives and feels it Finalé. He is a native of Cardenas, but the capital fills him with energy and plugs him into his creative whirlpool so that his work becomes a semantic device that meditates on the relationship between popular culture, religiosity and erotic expression in the Cuban nature.

Before finishing I would like to share a personal experience. There are some works of Finalé, of those in which the concealment of forms and expressions is manifested, that give me the sensation of observing a cimarrón fleeing through the mountain to hide in a palenque. In them appears that process of cultural resistance and syncretism that currently lasts.

The fact that the artist returned to his country and that today we can enjoy his creations, at a time when the sacred cows of Cuban art take refuge in foreign galleries and show little, speaks for himself of his proximity to the Cuban public. His work follows the cycle of water in nature. There are times of abundant rain that floods the rivers, to which difficult droughts occur. Even so, when we do not perceive a drop of rain does not mean that the water has disappeared. It is in the atmosphere, imperceptible, evaporated, condensed and ready to rush. That we do not see Finalé does not mean that he is not there, he is always waiting for the wet. The concrete test is each piece that springs from the ingenuity of the artist. His work knows no limits and never imposes them. It is chameleonic and voracious since its transgression. Proposes an orgy for the senses. It's like touching an iron and leaving your rusty footprint.

Moisés: you must replicate this artistic project, you deserve it and we deserve it. Reinvent as you have always done in your work. Fly with new verve, restless and disturb with the young blood. And finally, although they may call me wanting to underline the obvious, I would like to see a collective exhibition of Moisés Finalé with works by Belkis Ayón and Wifredo Lam. It is only a personal desire.