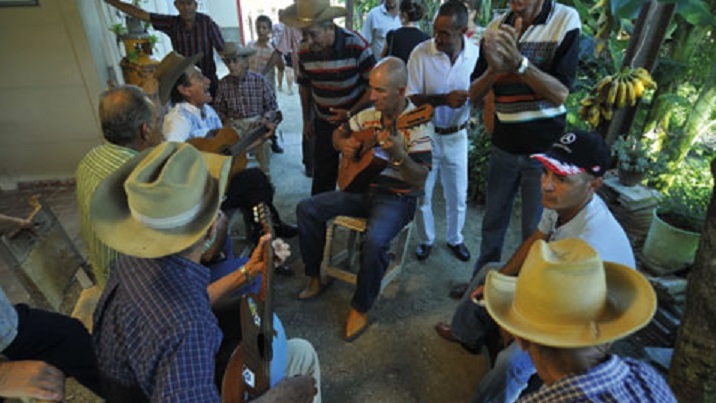 Punto Cubano: in its prime!

The Punto Cubano has been recognized by Unesco as Immaterial Heritage of Humanity. The Punto Cubano is a poetic and musical expression of the men and women of the countryside consisting of a tune or melody that expresses, in décimas or quatrains, a theme that may lead to a friendly controversy, with improvised or learned verses. In 2012, it had been declared «Cultural Heritage of the Cuban Nation».

The island's delegation, present at the twelfth session of the Committee for the Safeguarding of Intangible Cultural Heritage, defended this important nomination and stressed that the Punto Cubano is an identifying element of the nation that promotes dialogue and expresses the feelings, culture and values of the communities that practice it.
The Punto Cubano or Punto Guajiro, as it is also known, was born among the Spaniards settled on this land in the seventeenth century and sung accompanied by string instruments. Over the years, it started to add, in a rich amalgam, rhythms created in Cuba such as the guaracha and son.

The president of the Consejo Nacional de Patrimonio Cultural (National Council of Cultural Heritage,) Gladys Collazo, said that «there is no need to neither revive nor rescue the Punto Cubano. It is alive and part of our identity».

The Island has already three forms of expression included in the list of Immaterial Heritage by Unesco: the Tumba Francesa, the rumba and the Punto Cubano.