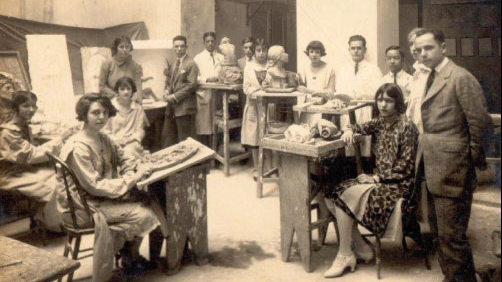 The Academia Nacional de Bellas Artes (National Academy of Fine Arts) of San Alejandro has just completed, on January 12, its first two hundred years. This important event was almost unnoticed by many, except for the unveiling of a plaque. But former teachers, students from the past and current ones celebrated the anniversary with love.

In the students register, first book (309), and with file 167 an inscription reads: D. José Marti Pérez, born in Havana, 14 years old. He entered the Elementary Drawing class on September 15, 1867. On September 22, 1922, with order number 160, another grand name: Pablo de la Torriente Brau, born in San Juan, Puerto Rico, 20 years of age. Commander Camilo Cienfuegos also appears...Many are the outstanding names that have, at some point of time, been in these classrooms. It is necessary to achieve, on this bicentennial, that the San Alejandro Academy is acknowledged, in its own right, as part of Cultural Heritage of the Nation.

For decades, it has been the only institution of its kind on the island, and its prestige increased both during the Colony and the Republic. A large number of art personalities were educated in their classrooms: Joseph Leclerc, Federico Miahle, Leopoldo Romañach, Armando Menocal, Esteban Valderrama, Enrique Caravia, Florencio Gelabert, Carmelo González...

In the classrooms and workshops of San Alejandro Academy, top figures of plastic arts have left their mark, but also of other manifestations of Cuban art, politics and social life, from Carlos Baliño and Fermín Valdés Domínguez, to Renée Méndez Capote, Eduardo Chivas, Flavio Grobart, Vicente Revuelta, Abel Prieto and Silvio Rodriguez, among many others.

San Alejandro National Academy of Fine Arts maintains its renewing breath. It is one of the oldest and most prestigious institutions in this hemisphere. It has existed for two hundred years and will exist for many more. Its walls were built with the feelings and love of the men who have guided it and left their influence there. There cannot be a better foundation! The history of Cuba and its culture vibrates in San Alejandro.