A Tico in Habana

If archives were not to be delved into and were scorned as simply useless and lugubrious places, we’ll be taking the risk of letting boldface names like Max Jimenez Huete (1900-1947) fall into oblivion in their own country –despite his being one of Costa Rica’s most outstanding artists in both the fine arts and literature. This globetrotter, sculptor, painter, drawer, carver, photographer, poet and bohemian lived and worked in Havana back in 1936, and later on from 1942 to 1944. His stays in Havana coincided with peak cultural moments that paved legit ways for the history of Cuban arts and culture. In his second visit, Max Jimenez found a city in which artistic creation was at its best: turning-point exhibits; painters in full swing like Mariano, Portocarrero, Cundo and Diago; a top-of-the-line sculptural movement; the presence of artists from different nationalities, such as Siqueiros, Reder, McNeil, Lerner and Hidalgo de Caviedes, let alone publications and institutions like the Lyceum, the Fine Arts Trust and the National Society of Fine Arts that were engaged in nonstop cultural creation. In one his texts, the artist somehow described this ambience: “Havana boasts a luxurious bevy of fantastic painters, so many and so good that this itself brings on some kind of devaluation. I don’t name them because their subtleness is hair-raising and they just can’t be boxed in altogether.” Under these favorable conditions, his first personal exhibit was organized at the Lyceum & Lawn Tennis Club gallery, where he unveiled a dozen paintings that, among other things, broached a number of topics such as black and mulatto characters that, as author Salarrue put it, their eyes reflect “the indigenous sorrow” and that he called “Negroes with the gloomy soul of the Indians.” This exhibition struck the attention of the critics and the Havana public. Perez Cisneros includes it in his imaginary “Friendship Hall” and contrasts this much open attitude toward the visitor with the one caused by the exhibit he put on a few years later in San Jose and that went virtually unnoticed. In his text on Max Jimenez’s great exposition at the National Museum in 2002, researcher Ramon Vazquez wrote: “Few artistic traditions owe so much to a single artist as Costa Rica’s owe to Max Jimenez.” However, the reality of that country’s artistic realm –so orthodox and hardly ever leaning to accepting artistic avant-gardism- could not take in the artworks of such a dissatisfied, restless and heterodox creator. In Cuba, though, the situation was quite different. Since the 1920s, avant-gardes have seized a “position” of their own without knocking down the “foe” walls. A certain balance kept the situation in a sort of “quarrelsome peace”. Academics and modernists shared the institutions, the halls, the publications and even the prizes. In our environment, Max Jimenez huddled with such members of the intelligentsia as Guy Perez Cisneros, Jose Gomez Sicre, Enrique Labrador Ruiz, Ramon Guirao and Jorge Mañach. Of course, all of them were on the insurgent side. Barely a decade ago, his works have been reconsidered by critics and experts following a longstanding stay in the realm of oblivion and indifference. Scholars like Alfonso Chase, Bernal Herrera, Luis Ferrero and Ana Mercedes Gonzalez have contributed to rescue the memory of an artist who deserves recognition and a definitive entry in the record books of Latin American arts. In the meantime, we treasure the MAX JIMENEZ HUETE file in box 24 / Foreign Artist Files / Letter J. We hope to open it up again pretty soon in the face of information requests or just to add new data on the artist. 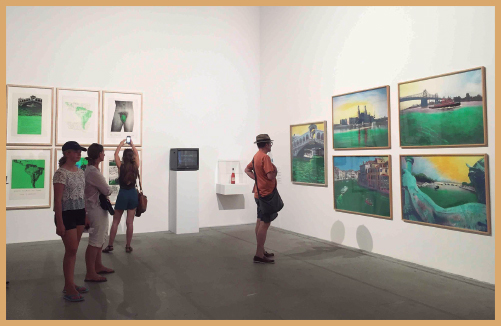