Utopia is without a doubt the quintessence of dreamers, thinkers and artists, the force behind movements and revolutions. It is in many cases the inspiration of conflicts and changes made by humankind. Two Citizens of Utopia, a duo exhibition of Ibrahim Miranda and Douglas Perez, seems to embrace these ideals. Curated by Orlando Hernandez and Rachel Weingeist at The 8th Floor in New York City, the show is a trip into an unknown world, an unfamiliar country, an implausible city.

In today’s global world it is rare to find emergent artists who identify themselves with a local or national reality. The ideas of nation/nationality have been affected by the worldwide concept of existence. The case of Cuba is a rara avis, where artists are gathering under an art in which a national root is still an obsession. The two artists in the exhibition were born, live, and work in the island nation; it is the island’s characters, life and cultures that are the main sources of inspiration. 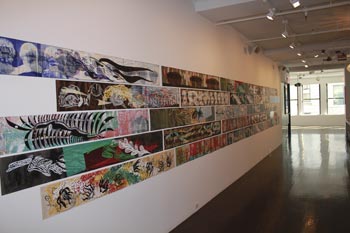 The work of Ibrahim Miranda (Pinar del Rio, 1969) is a journey into an imaginary world in which the map of Cuba is the epicenter, an influx of energy flooded with images and thoughts of how he envisions the island. From the Series of Mapas, the sixty pieces at the exhibition were made between 2008 and 2012 and have the same common format in which the artist has been working since the late 1990s. Created using as support professional geographical maps of the island, Miranda successfully interweaves them to evocate an intricate inner world that links random moments in the country’s history to a personal imagery that reflects a formal and conceptual connection with his vision of a utopian nation.

Miranda’s maps invite to the conversation creole images of colonial life, busts of citizens of an ancient Greco-Roman culture, elements of cults of Afrocuban religions as well as flora and fauna of the Caribbean island. Formally, they playfully go from figuration to abstraction and eloquently do not discriminate in techniques. All of these elements are subject to a concatenation of ideas that follow one another with a quasi-cinematographic rhythm. Miranda’s drawings need to be seen as a frequency of events, almost with a cartoon-like sequence. The gallery displays of his work, in some cases directly on the bare wall, increase the fluidity and the conversation as well as stimulate the appreciation of the art pieces’ dynamic as a whole.  Even though he has been working for more than a decade in the same format and technique, his work still preserves a fresh spark and the energy of new ideas.

The counterpart in the exhibition, Douglas Perez (Cienfuegos, 1972) exhibited eight oils on canvas and a watercolor from 2008 to 2010, some of them from his series Pictopia; a neologism created by linking utopian and pictography. Almost all of the paintings are ironic allusions to a cosmic and elusive city that has as a common denominator Havana and New York. These urban landscapes are full of hints for those who have the opportunity to know these metropolitan conglomerates: public monuments, landmark buildings and highways are redefining Perez’ own city.

In La Gran Marcha (The Great March) the old city of Havana is under a light snow, and city landmark buildings are reconfigured in a new urban landscape. The Cuban Capitol building is entrapped by a powerful massive highway which could have come out of the grandiose ideas of Robert Moses, the controversial city-planner of New York active from the 1930s to the 70s. A parade of Jurassic and strange animals fill the roads that directly refer to the evolution of the human race, as an ironic commentary on the unhealthy and dirty streets of today’s Havana, in which it is possible to find alive the most unexpected creatures. 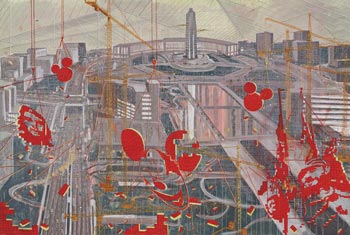 Douglas Perez’s Havana is always depicted as a city enclosed under a glass ceiling that allows the sun to come through only to deliver a weak luminosity, as seen in Pictopía III: Still I have a dream (2009). In the painting, the late 1950s Civic Square, known later as Revolution Square, is under (re)construction. Humongous cranes are hauling around larger than life images of the iconic Che Guevara picture by Korda, Fidel Castro’s photo from January 8 – when he arrived into Havana after the guerrilla war that put him in power – and Mickey Mouse, the Disney character; all made with red Lego pieces. Still I have … is a persuasive direct reference to the economical and social challenges that Cuban society has been facing in recent years. The wide avenues around the Revolution Square recall Oscar Niemeyer’s Brasilia. The Square’s center, with the iconic monument to Jose Marti counterbalanced by an image of the George Washington Monument, towers above a depiction of the Reflecting Pool in Washington, D.C.  The pollution of buildings, cranes and traffic suggests a new dynamic in the island’s life, projecting a dystopian vision of change; the painting is a chrysalis of a new city, of a future life.

In Pictopía XXVII: Hamelin (2008) New York City’s Grand Central Terminal is converted into an international airport, looking like the interior of an island colonial sugar mill. Travelers are represented by rodents going in one direction, passing customs and checking into a city whose portals are a sequence of three snakes’ heads with jaws gaping open as if to devour them.  The metropolitan conglomerate in the background seems to vibrate with a heavy quiet energy. Hanging from the ceiling is a signboard with international arrivals and departures framed by two clocks, one giving local and the other destination time. In recent decades, migration has been affecting the populations of international capitals, as well as reshaping Cuban society and the island’s life and development. Hamelin encapsulates a society, past, present, and future, in which the experience of travel is never a simple journey from one place to another but an ambiguous passage into the unknown.

Since its inception, The 8th Floor, along with the Shelley and Donald Rubin Collection, has been a beacon in New York City for those interested in Cuba, lighting pathways to a dialogue between artists of the two borders, the island and the exile. In Two Citizens of Utopia, Ibrahim Miranda and Douglas Perez offer a distillation of reality informed by Cuban social and economic issues, creating in the process a semantic reflection of life on the island.

Previous publication Umberto Peña. From Maturity to Excellence Next publication Set the Can on Fire. Interview with Mónica Ferreras