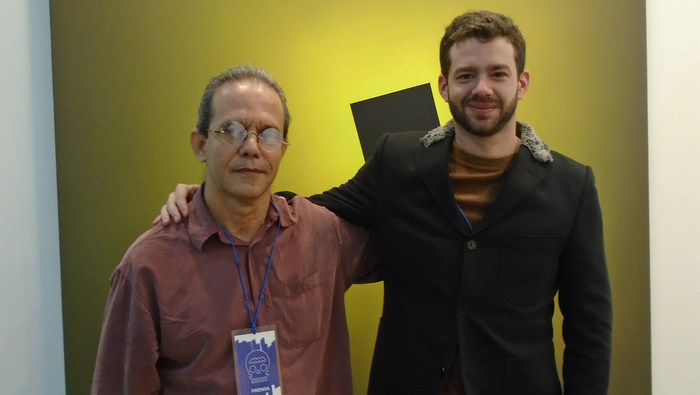 He had told me last year: "Zona Maco is one of the banners of our calendar. Together with ARCOMadrid it is the fair where we are best ». And a few days before his participation in the International Fair of Contemporary Art Zona Maco 2019, in Hall 7 of the Citibanamex fairground, in Mexico City, he had declared to Excelsior: «The old view we had of the gallerist is a little outdated. That's why I'm trying to get out of the gallery's white cube and make these kinds of projects a little more popular that can reach audiences that might not otherwise enter a gallery or a museum». The latter did not say it for pleasure: he is one of the youngest Madrid curators and gallerists of the moment, and one of them moves successfully on the international stage. To make an appointment with him was a bit difficult for me, because his stand at the Fair, in the same location of the previous year, was one of the most demanded by the numerous buyers who come here every year to see up close the attractive proposals that the gallery Javier López & Fer Frances, founded to «offer a unique experience: current art in an incomparable setting; nature and architecture at the service of your enjoyment in an exhibition ».

His hand is bandaged as a result of a home accident, but he does not object to laying it out for Arte por Excelencias on a very hectic day of the event.

«This is the fifth time we participate here- Fer points out- We have made a selection of some iconic and innovative pieces that are presented for the first time to the Mexican market. We bring works by some of the most acclaimed artists of the moment, such as Peter Halley and Alex Katz».

Peter Halley (New York, 1953) was the driving force, in the mid-eighties, of the so-called neo-geo movement, and is today one of the most important contemporary artists in the world. He makes a very expressive use of colors, very much in tune with pop art or digital art. His works move in the field of geometry, with straight lines and cold forms, in rectangular cells related to each other by diagrams and conduits.

Alex Katz (Brooklyn, New York, 1927), a figurative painter and sculptor, is considered one of the forerunners of pop art, although he has always denied belonging to that pictorial movement. In El País it has been said of him: «His paintings seem at first sight simple compositions with flat background colors, inhabited by human figures that recall pop art: portraits of friends in everyday positions, bathers on the beach, close-ups of faces that evoke images of fashion magazines, landscapes related to commercial graphic art ».

Comments Fer that Halley exhibits a piece from 2005 and that Katz has brought one of the works of the tenth exhibition that the artist has done with the gallery and that is now open in Madrid.

«In the past year- continues the 30-year-old gallerist- there have been some changes: some artists have left and others have entered. From Eduardo Sarabia we present this time a large format canvas that will be part of the next exhibition that we will have in the gallery. On the other hand, we have Santiago Ibáñez, a Spanish painter from Jaén with whom we started working recently».

«Zona Maco -concludes- is consolidated as a very good platform to make our artists known. We are a link with the art of this region, that's why we are here ».

Previous publication Rolling with Art. The Mini of The Italian Job Next publication Carboneros in Arte por Excelencias