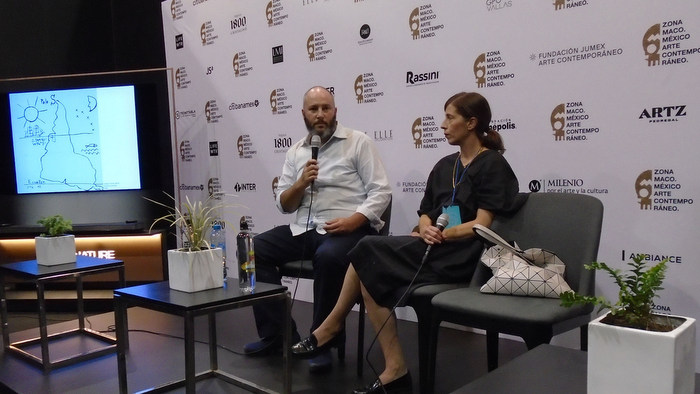 Questions from art in Brazil

Pablo León de la Barra, chief curator of the Museum of Contemporary Art of Niteroi, Rio de Janeiro, was one of the guests to dialogue with the public attending the International Fair of Contemporary Art Zona Maco, held in Mexico City between the 6th and the February 10 passed.

De la Barra, born in Mexico City in 1972, lived and worked in London for fifteen years. From there he went to New York, and now he is in Brazil. He is also assistant curator of Latin American art at the Museum of Art of São Paulo.

In the pleasant talk he spoke about how to maintain museums in the Latin American context, the strategies of resistance and survival. "There are points of reference in our region," said Pablo, "that are sometimes forgotten, because we want to be validated in the United States or in Europe".

The curator was invited to work at Casa França, Rio de Janeiro, "... a building built in the seventeenth century by a group of French architects and artists brought to educate Brazil in the fine arts. It is an incredible building, it looks like marble and it is made of wood. When I got there I thought about the kind of institution that place could be. It had very few resources, but in Latin America we have to resist what we have at hand. The public went not so much for the art as because it was an air-conditioned place, and it became common to see LGTB couples fleeing exclusion in other parts of the city. We set out to tell the story of the twenty-one years of Casa França's life. For better or for worse, the institution depended, as it happens in many parts of Latin America, on what the director could do and what the embassies or companies could finance”.

The last project we did was Pregunta, with the Chilean collective Mil Metros Cuadrados. We invite citizens to ask questions from letters that were hung on mobile structures placed in five places in the city. Very interesting questions arose: "When are we going to learn to vote?" -Seems never, judging by the last elections-, "When will they return the indigenous lands?", "Why are they selling the Amazon?”, "Why is money lacking if we are such a rich country?", "How to avoid the genocide of black and poor youth?" ... Every day the questions asked by the citizens of Rio to their fellow citizens or institutions changed. Through social networks the questions were reproduced. It was a way of understanding, through the population, the situation in Brazil.

Pablo insisted on the absurdity that in that immense territory means the construction of new museums, while the majority are abandoned or closed. "It is a lack of priorities," he said, "not to think about the future, but not even to remedy the past. It is very symbolic that the National Museum of Rio has burned down, that disappearance is a tragedy ".

Two years ago he was invited to work as chief curator of the Niteroi Art Museum, designed by Oscar Niemeyer as a kind of flying disc, "a futuristic construction that has to do with the image of the great architect to build images for the Brazil of the future, in this case an iconic museum for Niteroi. Something interesting happens with the institution: it is art, but it also attracts an audience that will see that "UFO" and make selfies with the image of the building. We have raised the challenge of getting people, in addition to taking pictures, have access to thought and culture, take advantage of the image of the city is intimately linked to the museum to design a thinking production and use the museum as a way to question many things”.

Previous publication The art of Irene Rodríguez in the big apple: more than flamenco Next publication Leo Messi and the Cirque du Soleil