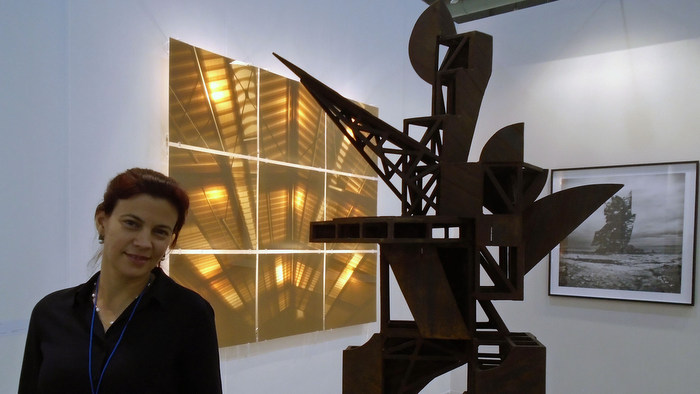 Three for the Servando in Zona Maco

In one of the first journalistic incursions of Arte por Excelencias in the 2018 edition of the Zona Maco International Contemporary Art Fair, we shared the good news that the Emerging Artist Award was given to Osvaldo González, represented by the Cuban Galería Servando. Both, gallery and artist, repeat their attendance to the Pavilion 7 of the Citibanamex Convention Center, in the Mexican capital, and this time there are two representatives of the visual arts of the Island that accompany Osvaldo: Adrián Fernández and Leandro Feal.

In Zona Maco 2019, the Servando has applied to a larger and more visible space of the New Proposals section. We talked again with Niurma Pérez Zerpas, its director.

«Zona Maco is the Fair in which the gallery has had a more systematic presence, we have been attending for six years now. The prize we got last year was spectacular, but apart from that the gallery is already recognized, as the artists with whom it works are recognized, the public always receives us very well. There are many reasons to return to Mexico».

Previously, we had always established a dialogue between two artists, but this time we have presented three, which are already known in the Mexican context, because the gallery has exhibited them on other occasions. You can see the recent work of Adrián Fernández, premiering this photographic series in which he presents landscapes where architectural structures predominate that induce him to question his real existence. It is also a sculpture from the series Monumento al hombre incompleto; visually it is related to the photographic series, but it is a totally independent work. In the case of Osvaldo González, an installation of the series Memorias fragmentadas is presented, so that a dialogue is established between the work of Adrián and Osvaldo for the approach to the architectural theme. The presence of the human figure is given by the two photographs of Leandro Feal».

Adrián Fernández is also a graduate from ISA in 2010. He is a professor of Documentary Photography at the Tisch School of the Arts at the University of New York. He exhibited in the Houston Center of Photography the show Estilo de vida (2011), in the XII Biennial of Havana Réquiem (2015), in the Servando Gallery Epílogos de la imagen idealizada (2013) and El umbral de la incertidumbre (2018), and in the Center of Development of the Visual Arts Monumento al hombre incompleto (2018), among other exhibitions.

Leandro Feal was news in Arte por Excelencias when we reviewed his exhibition Yo no hablo con fotógrafos (2017), in Servando. Of him are also the samples Donde nadie es exclusivo (Center of Development of the Visual Arts, 2013), Havana (Siegfried Contemporary, London, 2018) and y El intrusismo del inspector (Cibrián Gallery, Spain, 2019). He was awarded the scholarships for artistic creation New York Film Academy (2015) and Artist x Artist (Azcuna Zentroa, 2016).

Although the event has just turned on turbines, we wanted Niurma to give us an assessment on the artistic quality of the edition that runs until Sunday, February 10: «I have not walked the entire Fair to give a verdict, but I still have the feeling that last year was more spectacular, I was more amazed while walking. But, as always, the level of Zona Maco is very high».