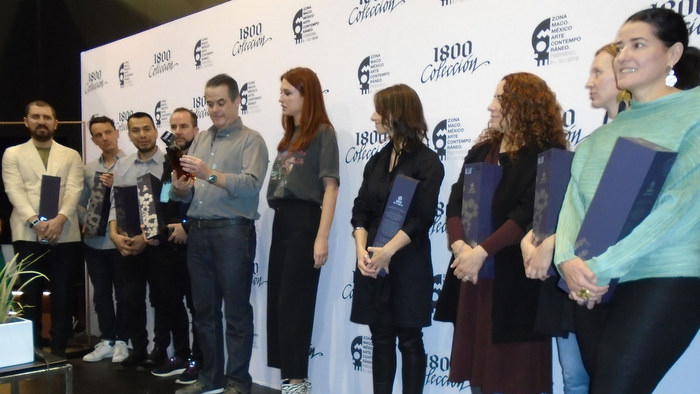 The prizes of Zona Maco

Although the Zona Maco International Contemporary Art Fair, which occurs every year in the first days of February in Hall 7 of the Citibanamex Convention Center in the Mexican capital, is not a competitive event, two prizes of acquisition of private institutions are acquired each year greater emphasis and have wide repercussion in the media: The Tequila 1800 Collection and the JSa Architecture for Young Artists. This last Arte por Excelencias has given it wide coverage because in its first edition Osvaldo González, represented by the Servando Gallery, won the Emerging Artist Award.

The 16th edition of the Fair has had a multi-award: The Mexican Iñaki Bonillas, for his work Diurnos, creditor of both awards.

The Tequila 1800 Collection Award was presented with the presence of Zélica García, director of Zona Maco, and Juan Domingo Beckmann, executive president of Casa Cuervo. According to its organizers, «recognizes the works, artists and galleries for their proposals and works presented at the Fair, with the knowledge of a curatorial expert jury. Being an acquisition prize, the Tequila 1800 Collection is an opportunity to exhibit in the art market, as it forms part of one of the most representative collections in the country: Casa Cuervo».

Tequila 1800 distinguishes itself by supporting the arts through multiple projects. The award that is given is intervened by an artist, in this case Fernando García Correa.

For its part, the Jsa Architecture Acquisition for Young Artists Prize is an acknowledgment instituted for "the strengthening of free, critical and solidary thought, and the constructive knowledge of society". The jury of the 2019 edition was integrated by the architects Javier Sánchez, Aisha Ballesteros and Benedikt Fahlbusc, the curators Octavio Avendaño and César González Aguirre, the promoters Álvaro Becker, Santiago Sánchez and Raúl Alfaro Segovia, the photographer and gallery owner Loreto Villarreal, and Guadalupe Artigas de Ramos-Cárdenas, president of the Association of Friends of the Museum of Modern Art.

Among the seven finalist works, the jury finally opted for Diurnos, by Iñaki Bonillas, represented by the Kurimanzutto Gallery. «Since the nineties- says the broad curriculum of the artist- Iñaki Bonillas has established a very specific relationship with photography in his work. Related to the aesthetics and conceptual practices of the sixties and seventies, Bonillas has gradually isolated the different elements that constitute, more than photography itself, the photographic fact (the camera, the film, the shutter, the relieved ...) to later connect them with different photographic procedures».

Previous publication FIL Cuba 2019: A celebration of Cuban literature and culture Next publication #SomosKanva: Art Madrid and Liquitex join in a charity project