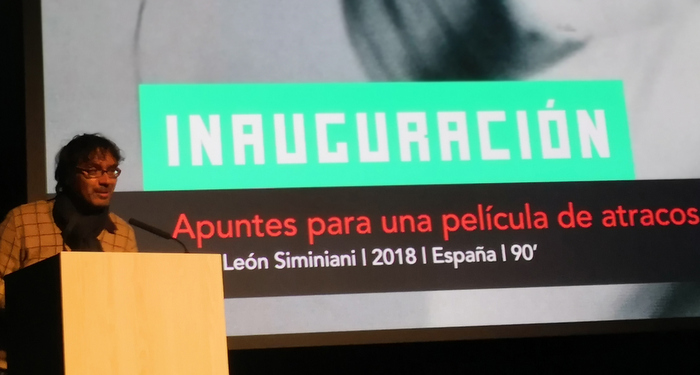 FIJR: 25 years overflowing Granada with the best of contemporary cinema

The International Festival of Young Filmmakers (FIJR) kicked off this Monday in Granada, with the premiere of "Notes for a movie of robberies", a documentary film by Elías León Siminiani, nominated for the Goya awards.

Under the slogan "25 years of overflow", until April 7, several spaces in the city will host seminars, workshops and master classes, as well as a careful selection of premium operas, feature films and internationally awarded short films that respond to the diversity of contemporary cinema, but still remain unpublished in rooms.

An overflow that is demonstrated by duplicating its activities during the festival and the previous week, under the name OFF FIJR hosted concerts, screenings and conferences in alternative venues, with which the festival is integrated into the cultural life of Granada.

With the Federico García Lorca Center as the main venue, the Official Section of the FIJR will have six feature films from France, Japan, Argentina, Canada, Austria and Spain. Stand out titles such as "Génesis" by Philippe Lesage, Espiga de Oro at Seminci, or "A faithful man" by Louis Garrel, who received the Silver Shell for the best screenplay at the San Sebastian Festival.

In addition, the festival has teamed up with two prestigious international short film institutions to discover the new talents of Colombian animation, emerged from Bogoshorts (Bogotá Short Film Festival), as well as take a walk through the 20 years of Kimuak, a platform of diffusion of the Basque short film.

Among the novelties of the festival is "Vibrations", a new competitive section that will adjudge a Young Jury formed by students. Titled in reference to "Vibration of Granada" (Val del Omar, 1935), it brings together Spanish filmmakers who experiment with language, and move between the documentary and the avant-garde, following in the wake of the Granada-born filmmaker.

The competing works are "Lurralde hotzak", by Iratxe Fresneda; "Reunion", by Ilan Serruya; "Letters to Paul Morrissey", by Armand Rovira, "<3", by María Antón Cabot and "Young and beautiful", by Marina Lameiro.

Another feature of the Festival is its involvement with local film and audiovisual schools. In that sense, a new section of Film Schools is being premiered, which on Saturday 6 will turn the Federico García Lorca Center into a short Granada party.

The training offer for students and professionals has also been doubled and, among other things, the historian and documentary filmmaker Luis E. Parés will give, in La Madraza, the seminar "Contrahistoria del cine español (1952-2018)", while the editor Ana Pfaff (Summer 1993) and the film critic Manuel J. Lombardo (Diario de Sevilla) will shed light on their trades with respective master classes.

In the traditional Meeting with Filmmakers, the protagonist will be Cecilia Bartolomé, who is considered to be the most feminist and censored director in Spain and one of the great pioneers of the history of national cinema. On Thursday April 4 at 18:00 the Palace of the Counts of Gabia will be screened some of her first works, such as "Carmen de Carabanchel" (1965), approach to the sexual life of a woman from Madrid, and medium-length film "Margarita y el lobo" (1969), with which she satirically dissects the situation of women during the Franco regime.

The festival will come to an end on Sunday, April 7 with the screening of "Family Movie" by Val del Omar, with live krautrock music by Migueline (Unity and Harmony). It will also be remembered two great filmmakers who died recently: Jonas Mekas and Agnès Varda; and the three festival awards will be presented: the Vibraciones Prize, the Sin Fin Prize and the José Val del Omar Prize for the best short film from the Film Schools section.

The International Festival of Young Filmmakers is organized by the City Council and the Diputación de Granada, Emasagra and Fundación Agua Granada. It also has the collaboration of 44 cultural agents, including the Junta de Andalucía, the Lorca Center, the SGAE Foundation, the Euro-Arab Foundation and the University of Granada.

On the cover: Elías León Siminiani presents "Notes for a robbery movie"