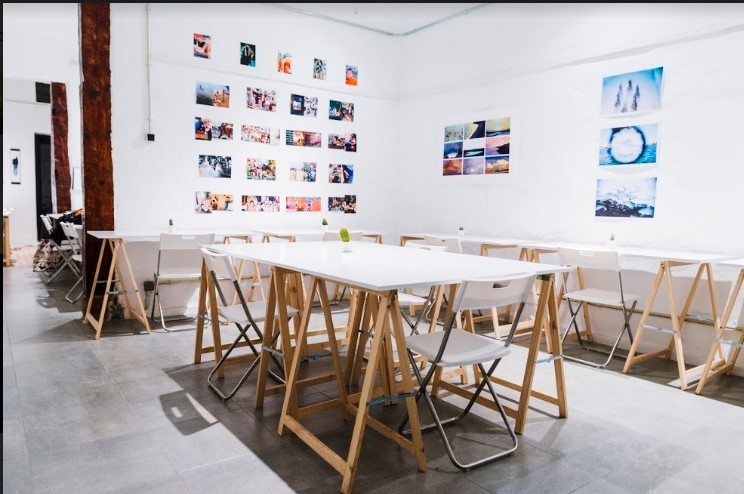 In its fourth edition, HYBRID Festival returns to Madrid during the beginning of the exhibition season, from September 13 to 28 to combine exhibitions and activities of independent or self-organized spaces that seek new ways to exhibit art, enriching the cultural offer of the city.

In addition to non-profit spaces, others that combine their cultural activity with a design shop, creative co-working, concert hall or even an architecture studio also participate. Two weeks to bring anyone interested to the alternative artistic fabric of the city and offer the possibility of reaching art in a different way.

As in the previous editions, the festival will again have a program of exhibitions and activities that will guide the visitor through 38 spaces mapped by various points in Madrid, from Prosperidad to Carabanchel.

38 venues are part of the HYBRID Festival network, with exhibition proposals and activities that will follow during the more than two weeks of the festival. The schedule includes unpublished spaces at the festival such as La Causa Galería, which presents the exhibition “Herida Internet”, by the artist with urban influences, Gviiie, or La Cubierta that participates with the exhibition “La casa por la ventana” Francisco Mayor and Laura Martínez Hernandez

As a novelty for the fourth edition, HYBRID Festival 2019 presents a new cooperation project between Madrid spaces and hybrid cutting initiatives from both Spain and other European countries. Commissioners and artists of spaces and projects invited to participate in SWAP present, in six spaces of the city, exhibitions and activities that will take place throughout the festival. The objective of this project is to foster synergies between local creators and projects that carry out their activity outside of Madrid.

The SWAP project has been curated and co-produced by Boreal Projects, the organizing platform of HYBRID Festival. It will have a special Focus in Ukraine, and three of the projects participating in the section come from 3 cities in this country: Kiev, Dnipró and Járkiv. The participation of Ukrainian spaces in the festival is a cooperation project with the Ukrainian Institute.

Impulsarte Award by Petit Palace and collective exhibition of Saisho

From September 13 to 15 at the Petit Palace Savoy Alfonso XII hotel, a hotel located in a former 19th-century mansion in Madrid, the exhibition is held with the eleven finalist artists of the third edition of the impulse by Petit Palace Award. The hotel brand, which is also the main sponsor of the HYBRID Festival, will award a prize of € 1000 and a single project at Hybrid Art Fair 2020 to one of the eleven artists of the exhibition.

The selection jury is made up of Carlos Aires, one of the Spanish artists with more international projection in the art market that will also offer a talk about his work during the exhibition; Cristina Anglada and Gema Melgar, professional curators and founders of the This is Jackalope organization, dedicated to the creation, production and dissemination of contemporary artistic practices; as well as the collector and representative of Petit Palace, Candela Álvarez de Soldevilla.

In addition, throughout the festival, you can also see the exhibition organized by Saisho at the Petit Palace Lealtad Plaza hotel. Saisho is an innovative hybrid art platform that presents and values ​​the work of emerging and mid-career artists both online and through a dynamic program of ephemeral exhibitions.

On the cover: Complicit Space

Previous publication Galería Cayón. Next exhibition Next publication May culture be our inspiration!