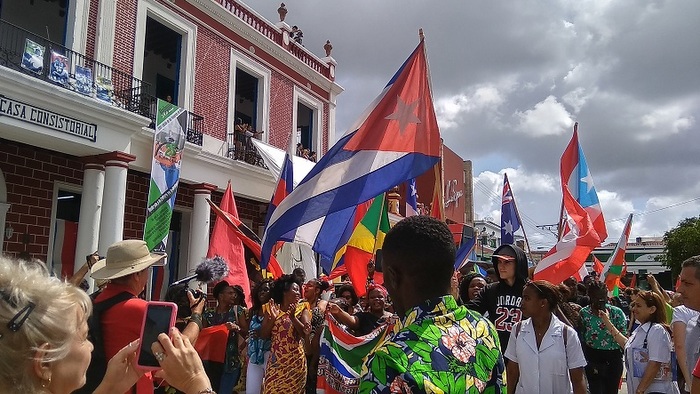 Romerías de Mayo: a quarter of a century later

This story begins like all the great ideas that initially sounded like madness, mental illness, serious "spiritual". A group of dreamers joined a good day in 1994 to found a World Festival of Artistic Youth in Holguín, almost 800 km from Havana. They followed the Martian maxim: "To create is to fight. Creating is winning. "

In addition, they had as antecedent an old catholic procession that every 3 of May from 1790 the inhabitants celebrated in the also known as City of the Parks. They say that it was Father Antonio Alegría who placed a wooden cross at 261 meters, at the top of Loma de la Cruz, once Cerro Bayado.

They dreamed, dreamed and founded in the middle of the nineties, a complex stage for the country in general. They named it Romerías de Mayo to the emerging festival, also taking advantage of the fact that the fifth month of the year is that of the abundant rains with which everything blooms and grows.

They had a name, a definite date - the first week of May - and a hospitable people with the will to offer their terroir for all that young lover of creation, art and culture. Then they would have had to sustain this project with music, dance, plastic arts, literature, cinema and theater. And so it has been for twenty-five years. Since then and during those days that northeastern territory is the capital of young art.

The founders continue to return each new edition, including Alexis Triana, Honorary President of the Organizing Committee, while adding more young creators from the five continents. Even Eskimos have arrived at the Romerías in some occasion. From May 3 to 8, 2019, in the year of the 25th anniversary, Holguin could not have been anything other than a hive of inexhaustible emotions. At the opening of the meeting, Triana made a call to the Holguin people around the world to come every May 3 and thus declare the Holguinero Present Day.

Just one week and an eight-page program to follow. It was difficult to be in so many activities at once. Romerías puts you to the test without hesitation. Among those that I did not miss was the traditional parade of horse carriages at twelve o'clock on the night of May 3; the inaugural parade and procession to the Loma de la Cruz; the Thought Our Memory Colloquium; space to dialogue and rethink (us), the Celebration of the Hugs; starring the University Student Federation of the province, Destrabando la trova; that the musician Eduardo Sosa led with guests like Liuba María Hevia, in charge of the pre-Romerías concert and that I did not miss either.

For its part, Bloguerías de Mayo, a site of debate among bloggers, journalists and cultural promoters, was commissioned to put the activities of the Romerías online, in the heat of the theoretical discussion on good practices in social networks and the virtual environment. To the Twenty-six call of the event attended delegates from around twenty countries, including the United States, Colombia, Mexico and Argentina.

The program of the plastic arts included the collective exhibition Version A.H.S.24 as part of the Babel proposals; visual arts event in Holguín, which took place at the headquarters of the Hermanos Saíz Association. The novelty: it was essential to use the QR Code of mobile devices to interact with the piece. Version A.H.S.24 takes advantage of the unavoidable presence of new technologies in everyday life.

Every corner of the city breathed happiness, culture and Caribbean flavor combined with the suffocating heat of an approaching summer. Holguín was a celebration in the year of the 25th anniversary of the Romerías de Mayo, a mixture of tradition and modernity in which it is recognized that there is no today without yesterday. Congratulations founders, romeros and romeras!