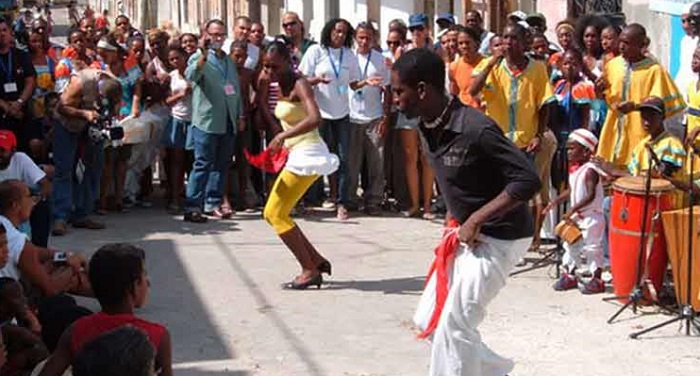 Trinidad to Host the Route of Rumba International Festival in Cuba

isel 25-08-2018
The International Festival The Route of Rumba, organized by Timbalaye, promoter of Cuban culture, is being held today in Trinidad, a town in the south-central part of the island declared a World Cultural Heritage Site.
The groups and guests to the tenth edition of the festival will be received in the cobblestone streets and mansions of the colonial area and will have their first presentation in the palace of the Royal Congos, an institution created in the seventeenth century by the African emigration.

Maria Eugenia, from the territory's cultural directorate, told the press the groups Fox Legend and Ache Chure, who have participated in the Fire Festival of Santiago de Cuba, will perform there.

During the day, artists who have dedicated part of their lives to this music-dance event will be recognized, and conferences and artistic demonstrations will be held with clay by descendants of the Santander family.

According to historians, the Trinitarian village is an example in the Caribbean in preserving the colorfulness of its traditions, especially the touches and dances of its African ancestors.

The festival, which was opened in Belen Square, Old Havana, on the 17th of this month, will continue in Ciego de Avila and Camaguey to end on the 31st in Santiago de Cuba, after being performed in nine provinces.

The event was sponsored by the Cuban Ministry of Culture, the Fernando Ortiz Foundation, the Union of Writers and Artists of Cuba, the National Heritage Council, the Hermanos Saiz Association, and the Timbalaye project, among other entities.
Previous publication Manuel Alcalá. "Everything is Matter" Next publication Josep Grau - Garriga in Michel Soskine Inc.