Art and Environment in Santo Domingo

On Sunday Oct. 24, the First International Caribbean Triennial came to a close in Santo Domingo, the Dominican Republic. Held at the Museum of Modern Art of the Dominican capital, some of its special guests were Puerto Rico’s Pepon Osorio, Haiti’s Phillipe Dodard, Colombia’s Maria Fernanda Cardoso, among others. The goal in the crosshairs of the organizing committee was the opportunity to provide the public with a panoramic view of visual creation in all of the Caribbean’s geographic-linguistic areas, an effort that demanded the presence of a team of curators.


This triennial can be construed as a continuation of the three Caribbean and Central American biennials and was convened by the Dominican Republic’s Ministry of Culture based on claims from both the national and regional artistic communities to count on an event like that. The Caribbean Biennial came into being in 1992 as a gathering specialized in Caribbean and Central American painting. In its two previous editions (2001 and 2003), it reeled in creators from the Diaspora, especially artists based in Miami and New York. 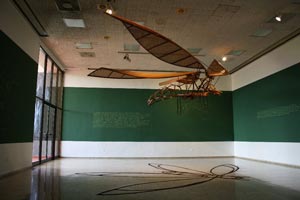 The conceptual axis that ruled this opening edition of the Triennial was the relationship between Art and the Environment, a topic that contemporary artists address either directly or tangentially. The jury, made up of Annie Michèle Dalmace, Yacouba Konaté, Carol Esposito Damian, Mirna Del Rosario Guerrero Villalona and Orlando Britto Jinorio, acknowledged the high level of conceptualization and creation shown by the artists and doled out three prizes, five special mentions and an Honorary Mention to artists with vast experiences in the arts (Antonio Martorell, Edouard Duval Carrié, Jorge Pineda and Marcos Lora Read).


The piece entitled Of a Wing, by Puerto Rican artist Charles Juhasz Alvarado, grabbed the Editorial Prize, consisting of the publishing of a monographic catalog. Another prize went to Miguelina Rivera, from the Dominican Republic, and she’ll have the chance to mount an individual exhibit at her country’s Museum of Modern Art. For her part, Alida Martinez (Aruba) was recognized with her addition in the resident artist program.


Many believe the event has been a genuine reflection of the Caribbean’s cultural diversity and praised the timing for proposing a theme of tremendous international significance. Hopefully the second edition will keep up the good work and will give the world once again a chance to take a closer look at the Caribbean art under a comprehensive curatorial concept. The Caribbean Triennial is now rubbing elbows with other attempts for promoting and fostering the arts in a region that’s been poorly delved into due to the endless diversity found in it.

Next publication The Tattooed Skeleton: Visions of Domestic Violence