Biting the Hand that Feeds You

Vitoria-Gasteiz: The Biting the Hand that Feeds You exhibit will remain on till Sunday Jan. 9 by Jaime Davidovich (Buenos Aires, 1936), an exposition sponsored by Naturgas Energía and commissioned by Arturo / Fito Rodriguez that has been mounted at the ARTIUM Hall of the Center & Museum of Basque Contemporary Art. 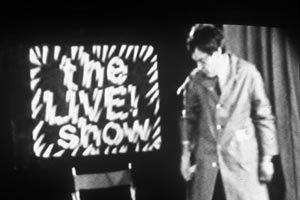 Biting the Hand… is distributed in three environments: the exhibition’s temporal and geographical context (NYC’s SoHo from 1968 to 1984); the incursion in the Tape Projects, and finally The Live! Show, the weekly TV slot the artist conducted and produced from 1979 to 1984.

Two showcases make up an independent cell within the exposition. It contains samples of the activities carried out by Wooster Enterprises, a company he founded with his wife Judith Henry and the support of artist George Maciunas and the Fluxus Group in an effort to both design and produce marketable items from an artistic and cultural standpoint. The exhibit is the proof of subversion: subverting painting by covering it with ribbons; subverting video by covering the monitors with tapes, and subverting commercial television by means of a transgressing and alternative TV project.

In the 1970s, SoHo jumped from a rundown city area to a neighborhood of huge cultural effervescence, the meeting ground and place of residence for creators, a cultural benchmark for contemporary culture. The SoHo community organization fostered a number of activities and collective experiences that eventually left a footprint in many artists. Cable Soho and Artists Television Network were two of the initiatives in which Davidovich played a major role. A series of audiovisual documents bears out this vital and creative atmosphere.

The exposition has a second centerpiece in the Tape Projects, developed by Davidovich in the late 1960s and the early 1970s within a framework of radical transformation of the arts. Davidovich turns adhesive tape –just a mere tool used for sticking painting cloths on the walls- into a researching instrument to probe the limits of an artwork. This research study carries a fast-paced evolution: first, its direct application on the exhibition space; then the colonization of other spaces used in daily life, the derivation toward intervention and performance, and finally its prominence in the artist’s early videos. 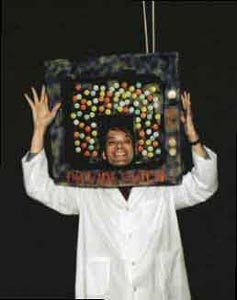 In this particular environment, the artist comes up with paper works and interventions in public spaces. A slideshow allows visitors to take a detailed tour around the many actions he conducted in these fields, while in a narrower space Empty Homeland (1975), a quasi-documental video armed with tremendous political shades –it’s based on an interview with an Argentine exile in New York- is shown. At a certain time, a hand puts tapes on the middle stripe of his country’s flag while in a different shot the tapes are used to gag the interviewee’s mouth.

Three TV sets serve as transitions between the Tape Projects and The Live! Show. It’s Red, Blue, Yellow (1973), images of three TV screens covered with red, blue and yellow tapes. Thus, visitors are ushered into the SoHo TV and The Live! Show, designed with the vain ambience of a television set. Countless screens show some of the highlights of this program that was aired live every week from 1979 to 1984 in a variety-show format. Davidovich forges television formal patterns into the avant-garde culture, thus making room for political lampooning, irony on the world of arts and social topics. The Live! Show is some kind of unprecedented artistic infiltration in the realm of television.

In the back of the hall, an audiovisual archive lets us in on some of the shows produced by Jaime Davidovich for SoHo Television. This project designed for public cable TV in New York, used to present video art pieces, the early music clips and interviews. Among the shows that can watched, there are interviews with artists John Cage, Vito Acconci and Laurie Anderson, a performance conducted by Cage himself, and a show entitled Outreach: The Changing Role of the Art Museum, a satiric effort on the role played by museums and starred by boldface names of the arts in the Big Apple at that time.

The exhibition’s catalog features texts penned by scholars Arturo / Fito Rodriguez, Rodrigo Alonso, Eugeni Bonet, Leah Churner and Herman Rapaport. Further documentation and information on the artist can be found at the hall.