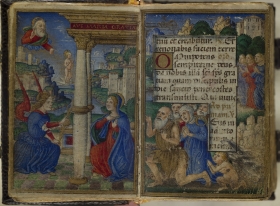 Mindful Hands. Masterpieces of Illumination from the Fondazione Giorgio Cini

A large exhibition entitled Mindful Hands. Masterpieces of Illumination from the Fondazione Giorgio Cini is due to be staged on the Island of San Giorgio Maggiore in Venice from 17 September 2016 to 8 January 2017 (official opening: Friday, 16 September 2016). Produced by the Fondazione Giorgio Cini, Studio Michele De Lucchi and Factum Arte, the exhibition is being organised with the support of the Helen Hamlyn Trust and the contribution of Pirelli. For the first time in over 35 years more than half of one of the most fascinating, invaluable Fondazione Cini collections will be on show: the collection of 236 miniatures acquired by Count Vittorio Cini from the Libreria Antiquaria Hoepli in Milan in 1939-1940, and presented to the Foundation in 1962. Visitors will be able to admire a selection of over 120 of the most significant and important miniatures in the collection plus a group of particularly fine illuminated codices. The academic curators of the project are Federica Toniolo, a lecturer in the History of Illuminated Manuscripts at the University of Padua, and Massimo Medica, director of the Museo Civico Medievale, Bologna, who were also responsible for cataloguing the entire collection.

One of the most important of its kind in the world, the Vittorio Cini miniature collection is made up of anthologies of illuminated leaves and cuttings of initials, mostly from liturgical works (graduals and antiphonals), comparable both in type and quality to collections such as the Wildenstein, now in the Musée Marmottan, Paris, or the Lehman collection, previously in storage in the Metropolitan Museum, New York. The Cini collection is representative of the principal regional Italian schools of manuscript illumination and includes works by some of the most pre-eminent illuminators, active from the 12th to the 16th centuries.

"Mindful Hands is part of the series of major exhibitions that the Fondazione Cini periodically holds to showcase its own collections, a remarkable heritage in historical, artistic and scholarly terms but little-known to the wider public”, explains Pasquale Gagliardi, Secretary General of the Fondazione Cini. “We have been working on this ambitious project focused on the collection of miniatures for years. The collection is unique in Italy and among the few of such high quality in the world. We achieved excellent results in terms of visitors and critical reception for the 2010 exhibition on the etchings of Giambattista Pianesi, for which all the works came from the archives of San Giorgio Maggiore. This encouraged us to continue the mission of promoting the so-called minor arts. And in fact the illuminators’ superb craftsmanship is in no way inferior to that of artists in other sectors of art.”

Produced with the coordination of the scholarly aspects by the Fondazione Cini Institute of Art History, the exhibition will have a fascinating itinerary created ad hoc for the spaces of the Sale del Convitto by the Studio Michele De Lucchi, aimed at also intriguing the non-specialist visitor. The exhibition will also be an opportunity to explore a specific phenomenon of collecting and taste: the practice of dismembering manuscripts – now deplorable – and putting only the leaves with figures, often only cuttings with initials, on the antiquarian market.

The only exhibit that does not now belong to the Fondazione Giorgio Cini is the magnificent Antiphonarium Q, on display courtesy of the library of the Benedictine Abbey of San Giorgio. A detached leaf from this codex is now in the Cini collection and it will be shown alongside the book at the beginning of the exhibition, thus virtually reuniting them and stressing that the image must always be seen in its textual context.

But Mindful Hands is much more than a straightforward display of exhibits. An integral part of the project has been the collaboration with Adam Lowe’s Factum Arte, experts on digital techniques applied to the conservation, reproduction and interpretation of works of art. Digital media organised in a thoroughgoing art installation will highlight and "translate" this extraordinary heritage in a modern key. In this way visitors will be guided

through the last sections devoted to the analysis and comprehension of the techniques involved in making illuminated manuscripts. There will also be an opportunity to examine close up two of the most precious manuscripts thanks to large-scale animations and reproductions: the Martirologio di Ferrara and the small but invaluable Book of Hours, commissioned by Ludovico il Moro. In addition, Factum Arte will make a facsimile of the Book of Hours for visitors to touch and leaf through.

The Helen Hamlyn Trust is an independent grant making Trust. Its principal focus is on the initiation of medium and long- term projects linked to the shared interests of Lady Hamlyn and her late husband Lord Hamlyn. The Trusts core ethos is to support the development of innovative projects, which aim to effect lasting change and improve quality of life. The Trust works in the fields of medicine; the arts and culture; education and welfare; healthy ageing; international humanitarian affairs; and heritage and conservation in India.

For further information regarding the Helen Hamlyn Trust please contact: