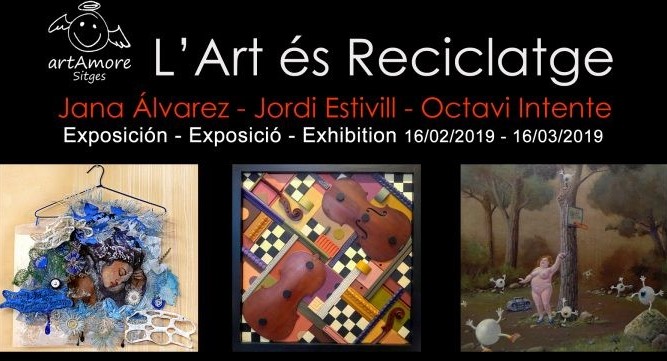 Anniversary of artAmore with Art is Recycling

Until next March 16 can be enjoyed the collective exhibition of the artists Jana Álvarez, Jordi Estivill and Octavi Try, El Arte es reciclaje (The Art is recycling). The three artists have held individual exhibitions at artAmore during previous anniversary celebrations and now, in this fifth anniversary, they join forces to fill the artAmore room with light, life and color, with renewed works that give value to found objects and make us reflect on the problem generated by waste on our planet.

Jordi Estivill. Assemblies, Collage-Painting, Artistic Recycling. He studied art at the Massana School in Barcelona - Sculpture Monograph and Modeling Technique, at the School of Arts and Oficis Llotja of Barcelona. Graduated in Performing Arts by The Theater Institute of Barcelona.

Octavi Try. Alma mater de artAmore Sitges, is an outstanding painter and draftsman from Egarense who, after a first stage as an illustrator, has made numerous solo and group exhibitions in Barcelona, ​​Girona, Madrid, Seville, France, USA, etc.

The celebration of the 5th Anniversary will take place on March 10 at 12.30.

Previous publication The art of Irene Rodríguez in the big apple: more than flamenco Next publication Excellency of the Art Award